A resident of the Beacon South Quarter apartment complex in Sandyford, Dublin records the extent of leaks around the windows within their home 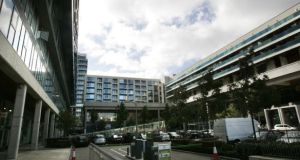 Apartment owners at the Beacon South Quarter development in Sandyford, Dublin have voted to pay more than €10 million to fix fire safety and other structural defects at the complex.

The decision by an almost two-thirds majority of owners who attended the annual general meeting of the development’s management company was made in the early hours of Thursday, after more than six hours of discussions.

The vote followed a warning earlier this week by Dublin Fire Brigade that owners could face legal action if they do not undertake fire safety works at their homes.

The city’s chief fire officer, Patrick Fleming, wrote to owners to say the fire brigade had been alerted to “fire deficiencies” in the development, built in 2005 by developer Paddy Shovlin’s Landmark Enterprises.

“If the required works are not carried out to the satisfaction of the Dublin Fire Brigade within an acceptable timescale, then it will have no other alternative but to pursue legal options.”

Several hundred owners on Wednesday night attended the rescheduled annual meeting of the management company at the Ballsbridge Hotel in Dublin.

Last month’s scheduled annual meeting at a hotel in Leopardstown had to be halted after a very large number of people turned up, giving rise to safety concerns.

Owners of the 880 apartments face costs of €7,500-€15,000 each in relation to the safety defects. Owners of apartments in blocks A, B1, C and D are being asked by BSQ Management Company Ltd to pay €9.1 million into a sinking fund for fire remedial works. Residents in blocks A and D were being asked for more than €1 million in relation to water damage.

Aoife Culleton, spokeswoman for the Beacon South Quarter Owners’ Group, which has about 300 members, said while Landmark Enterprises had gone into receivership, the construction firms which built the apartments were still in business and should be pursued.

Property investment company I-RES Reit, the State’s largest private landlord, owns 25 per cent of the apartments at the complex. As the largest single owner of apartments, it will have to pay charges of €2.7 million, and said it was supportive of the work being completed - particularly in light of the correspondence from the chief fire officer.

“I-RES has a responsibility to its tenants and a duty of care to all owners in ensuring the buildings are compliant with building and fire regulations,” it said.

A spokeswoman for the management company said it would not be making any comment.