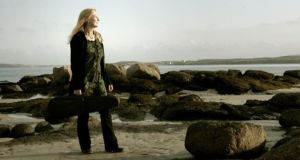 Musician Mairéad Ní Mhaonaigh said she was concerned at the plan to expand the shellfish operation at Braade Strand, Gweedore Bay, which is close to her home. Photograph Colm Hogan

Opposition is building in Donegal to a number of large-scale oyster farms planned for scenic areas in the northwest of the county.

Minister for the Marine Michael Creed recently granted four licences for shellfish farms spread across nine different sites in the Gaeltacht area. A number of appeals against the decision have been lodged with the Independent Aquaculture Licences Appeal Board.

Among those opposed to the development is actor Stephen Rea, who said it could lead to the industrialisation of “the most beautiful county in Ireland”. Rea, a frequent visitor to the area, said the planned farms would destroy the landscape, the ecology and the way of life of local people “without offering any benefit to them”.

“This is economic imperialism and must be resisted,” he said.

Musician Mairéad Ní Mhaonaigh, of traditional band Altan, said she was concerned at the plan to expand the shellfish operation at Braade Strand, Gweedore Bay, which is close to her home.

“I came home to Donegal for the scenery and the inspiration. I never expected to have an industrial site outside my window,” she said.

Brian O’Donaill, a local businessman, said it was “the scale of the thing which annoys us most”.

“This is in a Special Area of Conservation. The scenery is the first thing you see when you get off a plane at Carrickfinn [Airport],” said Mr O’Donaill.

Just two weeks after Donegal was deemed “the coolest place on the planet” to visit this year by National Geographic, a notice appeared in the Donegal Democrat confirming the licences had been granted to a number of different operators .

Mr O’Donaill said this meant a “staggering increase of 700 per cent” in the area to be covered by the metal trestles used for oyster farming.

Campaigners say the beaches and foreshore which have garnered attention for Donegal across the world will be dotted with unsightly metal trestles.

They have lodged a complaint with Donegal County Council saying abandoned trestles on the foreshore constituted illegal dumping.

Mr O’Donaill said locals had lived happily alongside aquaculture businesses for decades, but noted that these had been unobtrusive. He questioned why no Environmental Impact Statement was required for the new licences.

When an oyster farm was mooted for the nearby inhabited island of Cruit, musician and local resident Daniel O’Donnell was one of those to speak out against it.

“It troubles me greatly to think this local area will be destroyed,” said O’Donnell, who stressed that he was not anti-jobs, but believed the enterprise was the “wrong situation in the wrong place”.

Richie Flynn, of the Irish Farmers’ Association’s aquaculture division, said 250 people were employed in oyster farming in Donegal and that the industry helped to improve water quality because the species filtered water.

“In Manhattan, they are putting one billion oysters into the water to clean it up,” he said.

A spokesman for Mr Creed said there was a period of consultation before the licences were granted and no objections were received.

However, Mr O’Donaill said one notice about the matter was published in a local newspaper and another was displayed at Bunbeg Garda station, which “nobody saw”.

“I read all my news online and I try to stay out of Garda stations as much as I can,” he said.

Des Moore, one of the licencees in the Braade-Gweedore Bay area, said he regarded himself as an ambassador for Donegal and Ireland given the popularity of oysters around the world.

“This is a national resource. I am an environmental scientist. We do not disturb the environment. There has to be balance. We cannot always say ‘no, no, no’,” Mr Moore said.