Power restored to thousands of homes after bad weather 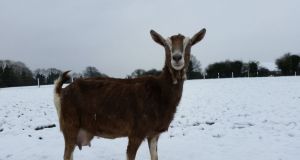 Sue the goat on her way to the parlour in Co Kildare on Wednesday morning. Photograph: @Anna_Dairy on Twitter 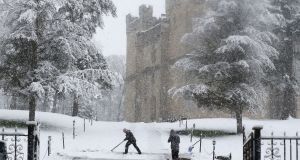 A man clears the snow at Langley Castle in Northumberland on Wednesday. Photograph: Owen Humphreys/PA 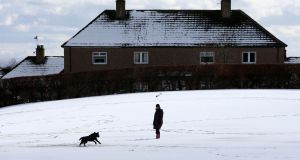 A man walks a dog in the snow in Carluke, Scotland. Photograph: Andrew Milligan/PA Wire 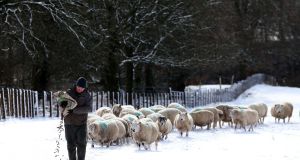 A farmer feeds his sheep in a field near Carron Valley in central Scotland. Photograph: Andrew Milligan/PA Wire 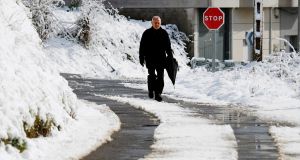 Power has been restored to thousands of homes across the country.

Almost 8,000 homes were without power for most of Wednesday after snow and bad weather hit the country overnight.

However, all of the affected homes had their power restored by 6pm on Wednesday.

An ESB spokeswoman confirmed 16,500 customers had no power on Wednesday morning.

Two weather warnings for snow, ice and heavy rains were in place on Wednesday morning, as motorists faced traffic disruption.

What way does a Tipp man clear away the snow?? .. With a hurley of course! Pics c/o Kate Heffernan #snow #Tipperary pic.twitter.com/gPpC4ZaodP

#Snow joke...my view from the train this morning near Enfield #Ireland pic.twitter.com/z44GgBjfUL

Its a white morning here in Kildare..Time to milk those goats ❄ #snow #march #spring #farming pic.twitter.com/KXKKGTDSif

This weather warning was valid until 10am on Wednesday.

A warning for heavy rain was also issued for counties Dublin, Louth and Wicklow. The warning is in place until Thursday on 7am.

Gardaí have asked people to be extra careful on the roads and footpaths.

“Give yourself plenty of time to reach your destination and use major routes as they are more likely to have been gritted than secondary roads,” it said.

“Remember that stopping distances are 10 times longer in ice and snow.”

Wednesday night will be blustery, with further heavy rain at times, particularly in the midlands, south and east.

The west and northwest will remain drier, with some frost overnight amid low temperatures of 0-4 degrees Celsius.

Thursday will be cold and cloudy in places during the morning, with showers in the east and south.

Conditions will become brighter in the afternoon, with scattered showers. Temperatures of 8-10 degrees are expected.

Frost is due in many areas overnight on Thursday. Heading into Friday and the weekend, more settled, milder weather will develop.

Saturday and Sunday will be mostly dry, with a mix of cloud and bright spells.

Temperatures will be 11-14 degrees during the afternoons. Cooler conditions are expected on the east and south coasts.