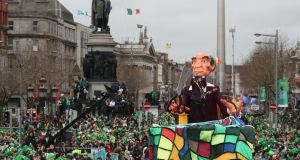 Parts of the country are preparing for a St Patrick’s Day deluge after Met Éireann issued a status yellow rain warning for counties Donegal, Galway, Mayo and Sligo.

The forecaster anticipates accumulations of rainfall in western parts of up to 80mm over a 48-hour period between 9am Friday and 9am Sunday, although most areas will be touched by the wet weather over the course of the holiday weekend.

Rugby fans attending the Ireland v England Six Nations match and St Patrick’s Festival revellers are advised that rain is expected to close in on Dublin as Friday evening progresses and blustery conditions should contribute to an even chillier feel.

There will be little escape from the precipitation over the following days with heavy bursts set to affect western and northern parts on Saturday.

Patchy rain and drizzle is due elsewhere, with temperatures recovering to the mid-teens on Saturday. The best of tomorrow’s weather will be reserved for the southeast, which will experience a comparatively pleasant day.

Sunday will get off to a cloudy, misty and breezy start, according to Met Éireann, with further heavy rain developing. Fresh gusts will return in most areas and temperatures will drop to as low as 4 degrees on Sunday night.

Changeable and unsettled conditions will persist for the early half of next week with the risk of sharp to severe frost and wintry showers in places.

The poor weather outlook comes amid a busy weekend schedule of events across the country.

Funfairs will be open at Merrion Square and Custom House Quay from Friday to Sunday, and a treasure hunt will start from City Hall on Saturday morning.

A number of guided tours and arts exhibitions have been announced, while the prawn festival in Howth and the Spirit of Dublin Craft and Food Fair at Teeling’s Distillery are the main gastronomic attractions of the weekend.

Galway city will host its own free family concert at Eyre Square following the parade on Friday, and a charity cycle which will be launched by guest of honour Sean Kelly has been organised for Sunday.

The Kilkenny Tradfest is expected to draw a large crowd with music and dance sessions across the city until Sunday, while up to 50,000 people are expected to attend the Limerick International Band Championship on Sunday.