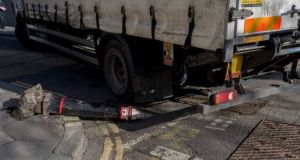 A study has found that of 193 work-related fatal road incidents, truck drivers were involved in 99. File photograph: Getty Images

Nearly a quarter of all road traffic fatalities in the Republic are work-related, according to a new report published by the international Institution of Occupational Safety and Health (IOSH).

The institution, representing more than 46,000 members in 120 countries, is the world’s biggest professional health and safety organisation.

Its Irish study saw researchers from UCD analyse coroner records on road traffic fatalities in Ireland over the four-year period from 2008 to 2011.

The researchers identified three key groups at risk from work-related road fatalities: those driving for work; those who work on the side of the road; and non-workers or bystanders whose deaths are associated with a work-related driving activity.

The institution expressed particular concern at the number of drivers of large vehicles in the Republic who had been unaware of collisions with pedestrians or cyclists until they were halted by a witness further on in their journey.

* Truck drivers were involved in 99 of the 193 work-related fatal incidents.

* Of the 193 work-linked fatalities, 29 were of people who were engaged in work activity at the time of the collision.

* 45 were of bystanders where work activity was a primary contributor to the collision.

* 119 were of bystanders where work activity was not a direct contributor to the collision.

“The most striking depositions are those in which drivers of large vehicles were largely unaware of the collision with a pedestrian or a cyclist, until they were halted by a witness further on in their journey,” said Prof Anne Drummond from the UCD School of Public Health, Physiotherapy and Sports Science, who led the study team.

“These situations could almost certainly be reduced by introducing measures to increase visibility in and around sections of large working vehicles traditionally known as “blind spots” and improving the awareness among pedestrians and cyclists of such blind spots,” she added.

“With increasing volumes of traffic, including work related traffic, these findings should be of real concern to road safety, public health, occupational health and regulatory authorities,” she said.

Kate Field, head of information and intelligence at IOSH, said the research will hopefully lead to an improvement in the reporting of statistics on fatal work-related road traffic incidents, “helping to highlight the importance of reliable sources of notification through coroner, police or regulatory authorities records to avoid under-reporting and misreporting practices”.

Separately, the Road safety Authority has warned of consequences for employers who fail to put in place company “driving for work” policies.

The full report, entitled Fatal Collisions on the Road and Safety and Health, can be downloaded at iosh.co.uk/roadfatalities