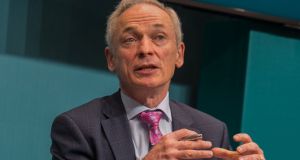 Minister for Climate Action and Environment Richard Bruton welcomed the overall decrease, but highlighted Ireland was “far off course to achieve the emissions targets that we have committed to”. Photograph: Gareth Chaney Collins

Figures released by the Environmental Protection Agency (EPA) show Ireland’s carbon emissions decreased slightly in 2017, marking the first time since the recession that they have declined.

Greenhouse gas (GHG) emissions in Ireland – at 60.75 million tonnes of carbon dioxide – were 0.9 per cent lower than in 2016. GHGs are the biggest contributor to global warming.

The EPA warned, however, Ireland was set to miss emission reduction targets and agriculture continues to rise at a strong rate – up by 2.9 per cent on 2016.

Minister for Climate Action and Environment Richard Bruton welcomed the overall decrease, but highlighted Ireland was “far off course to achieve the emissions targets that we have committed to”.

“Since the recovery, we haven’t succeeded in breaking the link between economic progress and emissions in the industry, agricultural and transport sectors. The reality is that we are 95 per cent off course to deliver on our 2020 targets,” he said.

The main factor underpinning lower transport emissions was a fall in cross-Border fuel tourism due to currency fluctuations.

The rise in agriculture emissions was mostly due to higher dairy cow numbers. Lower household emissions reflected a warmer year in 2017 with less heating required, especially during the winter months. A significant increase in renewable energy used in power generation displaced carbon-intensive fuels such as coal and peat.

EPA director of the Office of Environmental Sustainability Dr Eimear Cotter said: “A decrease in our GHGs is welcome, particularly in the context of a growing economy.”

However, some of the underlying drivers of this decrease pointed to circumstance rather than deliberate action, she said. “This would raise questions about the longevity and enduring nature of these decreases in future years.”

The figures indicate Ireland will exceed its 2017 annual limit by nearly three million tonnes. “This gives a measure of the gap between where Ireland is currently in terms of the 2020 pathway and where we need to be and indicates the scale of the challenge facing the country in terms of meeting our long-term decarbonisation ambitions.”

Earlier this year, the EPA released its projections for future years, which indicated Ireland overall was locked into a pattern of rising emissions up to 2025.

Senior manager in the Office of Environmental Sustainability Stephen Treacy said Ireland’s national policy position was to reduce CO2 emissions in 2050 by 80 per cent across energy generation, built environment and transport sectors, with a goal of climate neutrality in the agriculture and land-use sector.

While there was a decrease in 2017 energy and transport emissions, “underlying demand and output growth threatens Ireland’s long-term goals”, he added.

With the UN COP24 conference in Poland focused on ensuring full implementation of the Paris Agreement, “we need to also implement sustainable and enduring policies and measures here in Ireland that will move us on to the required low-carbon pathway,” he said.

The EPA figures show dairy cow numbers increased by 26 per cent in the past five years while emissions from the sector increased by 10 per cent over that time. “Agricultural production has gained some efficiency . . . but we have some way to go before full decoupling,” the EPA notes.

Green Party leader Eamon Ryan said Ireland was “Three million tonnes below where we have promised to be under European effort-sharing agreements. At current carbon market prices this will cost us some €60 million to cover that year. This cost is going to increase year-on-year unless we begin to change our ways.”

The fall in emissions was primarily due to reduced use of Moneypoint power station rather than any underlying change in public policy, he insisted.

Tom Barry showed great military expertise, says historian 10:54
Sinn Féin urged to take action over Stanley’s ‘glorification’ of IRA massacre 10:22
Some 5,300 people waiting over two years for Irish citizenship application to be processed 10:09
Man (30s) dies after being hit by car on M50 on Sunday night 08:43
Exiting Level 5: What will be allowed from December 1st? 08:26