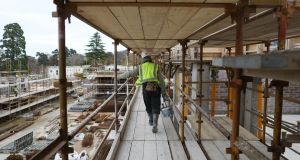 Plans for almost 380 apartments in seven blocks up to eight storeys tall on Griffith Avenue would break Dublin City Council height thresholds by more than 60 per cent, it has emerged.

The application by Cairn Homes to build on a three-hectare site previously owned by the Christian Brothers is the first major housing development in the city to take advantage of Minister for Housing Eoghan Murphy’s decision to scrap height caps last December.

Plans for the 377 apartments, along with eight five-bed terraced houses, on the north side of the tree-lined avenue close to the historic Marino Casino were on Monday presented to city councillors ahead of the council’s submission on the scheme to An Bord Pleanála.

Cairn has made its application directly to the board under the fast-track process for large housing developments. Under the Strategic Housing Development system, applications for schemes of more than 100 homes, or blocks of 200 student bed spaces, are made directly to An Bord Pleanála, bypassing the local authority decision phase.

However, the relevant local authority must submit a report to the board setting out its view, and the view of the councillors on the development.

Councillors were yesterday told the Griffith Avenue development, at up to 26m or eight storeys, would breach the maximum height allowable for the area by 10m. However, the council’s planning department said this threshold had been “superseded” by new guidelines issued by the Department of Housing last December, which removed caps on building height.

Planner Carol Smyth told councillors that although the new height guidelines “trump” the council’s rules, the council had informed the developer the scheme was in contravention of its development plan. The submission the council would make to the board would reflect its views on whether the scheme met the council’s objectives for the area and whether the height of the development would have a detrimental impact on access to sunlight and daylight, whether there might be “microclimate impacts”, and whether it was justified by proximity to a transport hub, she said.

However, councillors said they wanted it made explicit they did not support the breach of the city development plan’s height rules.

“The scale of the apartment buildings is totally out of character with the area and would inappropriately dominate this stretch of Griffith Avenue. The height is way in excess of that provided for in the development plan. Regardless of what the Minister and his department say, the height should at least comply with the development plan,” Fianna Fáil councillor Deirdre Heney said.

Fine Gael councillor Naoise Ó Muirí said the city development plan “is my bible”, and must be defended. “This is a clear breach of height. I am not happy to throw the development plan out. I think we should defend it.”

Independent councillor Damien O’Farrell said the development, which had more than three times the number of homes than a previous plan for the site, would have a serious impact on traffic, yet the developers had submitted a traffic analysis that was six years old “that is simply not acceptable”.

Councillors also heard that the development would require the felling of three mature lime trees on Griffith Avenue and the construction phase would take three years.

Observations on the plans can be made until February 1st. The council’s submission must be lodged by February 22nd.