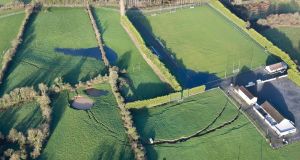 Gyproc repeated its apology to locals for the disruption caused by the land collapse at the local community centre and Magheracloone Mitchells GAA pitch. Photograph: Pat Byrne

Politicians, local authority officials and residents in south Co Monaghan have agreed to a forum of regular meetings on the problem of sinkholes and crown holes that have forced the closure of the L4900 road at Drumgossatt village.

The holes, and consequential land collapses, are related to historic gypsum mining in the area but have caused concern to local residents, some of whom had to leave their homes following a major subsidence in September.

Sinkholes occur naturally in limestone areas, while crown holes, which look the same, are the result of subterranean human activity, including mining. An area between Carrickmacross in Co Monaghan and Kingscourt in Co Cavan has been mined for gypsum since the early 20th century.

Earlier this week residents met senior officials and councillors from Monaghan County Council, senior managers from the mining company Gyproc (which now extracts gypsum from an open cast pit), external engineering consultants working with the company and the government and several politicians, including the Minister for Enterprise, local TD Heather Humphreys.

Gyproc repeated its apology to local people for the disruption caused by the land collapse at the local community centre and GAA pitch, and the closure of the L4900 linking the village to the main R179 Carrickmacross-Kingscourt road. The company said it was committed to dealing with the problem and remained committed to community involvement.

According to a council statement it was agreed that a “stakeholder forum” would be established to facilitate ongoing communication and that it would meet in mid-February.

Minister of State Seán Canney said there was no need for an independent inquiry into what had happened.

The L4900 is to remain closed until at least March, while further exploratory drilling and geotechnical analysing was carried on to help determine whether it was safe to reopen it.