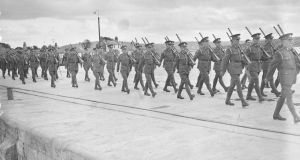 British troops evacuating Spike Island in 1938 for its handover to the State. Photograph: National Library of Ireland/Irish Independent/NPA collection

Spike Island in Cork has been nominated for Europe’s leading tourist attraction at the prestigious World Travel Awards 2017.

The former prison site joins Buckingham Palace, The Eiffel Tower, the Colosseum and the Acropolis in the top ten sites chosen to compete for the European category.

Winners in the awards, described as the “Oscars” of the travel industry, will be chosen by public poll with the vote of those working in the tourism sector counting double.

The nomination caps an auspicious year for Spike Island following its reopening in June 2016, with a nomination for a Chamber’s Ireland tourism award followed by a nomination at the 2017 Irish Tourism awards for best leisure tourism innovation.

The former monastery, fortress and prison was turned into a visitor attraction in 2016, in a project co-funded by Cork County Council and Fáilte Ireland.

Reached by ferry from Cobh, visitors to the island are taken on a guided tour through the 1,300-year history of the island. It was home to a 6th century monastery before a 3,000-capacity star shaped fortress was built in the early 1800s, to protect the southern approaches to Western Europe.

That same fortress became the largest prison in Britain or Ireland in the 1850s, according to local historians, when its numbers swelled during the famine years to over two thousand.

“We are blessed with rich authentic history that has echoed the demands of the mainland for many centuries”, said island manager John Crotty.

Spike Island is looking to make it three in a row for Ireland at the World Travel Awards, following the success of Titanic Belfast’s win last year and Dublin’s Guinness Storehouse in 2015.

The competitions organisers praised Spike Island for its “rich history that is authentically retold using guides and interpreted spaces, the variety of day and night tours and varying ways to enjoy the attraction, and the strength of its visitor feedback”.