Some houses use more than 12,000 litres of water a day 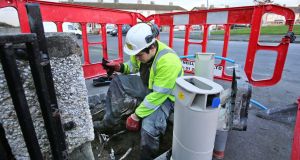 Workers install water meters at houses in Blanchardstown. Just a tenth of Irish Water customers accounted for almost half of all water used according to new statistics. File photograph: Colin Keegan, Collins Dublin

Some households were recorded as using more than 12,000 litres of water per day in 2015, compared with an average household usage of 383 litres per day.

Just a tenth of Irish Water customers accounted for almost half of all water used according to new statistics.

The data, taken from water meter readings and interpreted by the Central Statistics Office (CSO), reveals trends in water usage across the country, and reveals the huge discrepancy between the most wasteful and the most efficient households.

A tiny proportion of Irish Water customers, representing about 2,300 out of 771,348 meters, accounted for 12 per cent of all the water used for domestic purposes in 2015.

Around the same number of meters recorded average consumption of around 12,600 litres per day, amounting to 4.6 million litres of water per meter per year compared with the wider annual average of just under 140,000 litres.

Just 10 per cent of meters accounted for 43 per cent of all water used across 2015, while 3.4 per cent of customers consumed just less than a third of the total.

While the figures may provide some insight into profligate water usage by a small cohort of households, the CSO sought to clarify that the larger consumption figures are most likely indicative of leaks in the water supply causing tens of thousands of litres to go wasted and unused.

Figures for 2014 are for just six months and rely on a smaller data sample, but they show little variation from 2015 with average daily consumption rising only slightly from 381 litres to 383 litres over the 18-month period.

The CSO publication released on Tuesday also contains a county-by-county breakdown of average water consumption in 2015 with Cavan registering the lowest average daily consumption of 313 litres compared with 430 in Kerry and Tipperary, the joint-highest nationwide.

It also provides a breakdown of Dublin post codes with average daily consumption in the Dublin 6 area the highest at 488 litres closely followed by Dublin 4 on 459 litres, while Dublin 2 had the lowest usage at 283 litres.

The areas of Dublin 17, which comprise much of Coolock and Edenmore, and Dublin 24, which includes Tallaght, were not included in the figures due to the disproportionately low number of water meters installed there.

The overall statistics from the CSO only present a partial picture of water usage, wastage and leakage in the State as meters have not been installed in apartments while many households in rural areas rely on group water schemes and wells.