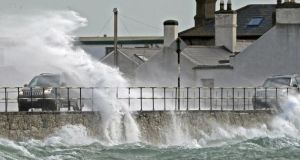 A dramatic drop in temperature has brought bitterly cold winds, wintry showers, frost, and even some thunderstorms and snow are forecast.

The news is not much better for the Bank Holiday weekend. Although the weather will gradually get warmer towards the bank holiday weekend, forecasters predict wet, windy and unsettled conditions.

Met Éireann forecaster Pat Clarke said the change in temperatures was due to the cold air coming down from the Arctic.

“There were a few wintry showers over Ulster overnight on high grounds. Temperatures are down close to freezing, even a little below last night,” he said.

“These days are a bit more typical even though it is the 25th of April but I’ve seen snow myself in late April before.

“We’ve had little or no rain this spring. We’ve had a lot of dry weather. but we haven’t had too many extremes. In March, we had all types of extremes and also nice sunny weather and high temperatures at times, and snowy weather and windy weather.”

Mr Clarke told The Irish Times said it had been “very, very dry” over the last six weeks in Ireland.

“April is often a cold, windy and showery month. This month has been the opposite, it’s been dry. They’re are even watering in Punchestown today to make the ground safe because the ground is so firm . Farmers could probably do with some rain while the rest of us probably wouldn’t like it.”

After a night of freezing temperatures, Tuesday morning was bright, sunny and mostly dry.

However, rain, and some hail and sleet, with a “few thundery bursts” are expected to spread through the day.

Temperatures will fall to minus 2 degrees on Tuesday night bringing frost and icy patches.

Mr Clarke said the temperatures would gradually rise towards the weekend.

“Today will only be around 7 to 10 degrees today, which is well below normal. Towards the weekend, Friday, Saturday , Sunday, it’ll be more like 10 to 12, maybe 13 degrees, which is just about normal ,” Mr Clarke said.

“As the days go on there’ll be showers tomorrow and into Thursday. Probably a lot of dry weather Friday but we’re under threat of some rain trying to break in from the Atlantic during the course of the weekend.”

“While there might be some dry weather around on Saturday rain will be forging in from the Atlantic at some stage late in the day and overnight. And there is a prospect of wet and windy weather for Sunday.”

Forecasters predict the early day of next week are set to be mild and unsettled with some heavy rain.