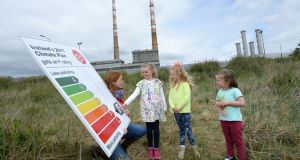 “Scary maps and scary statistics” are no longer sufficient to deal with the global threat of food insecurity due to extreme weather events, two leading climate change experts have said.

Earlier this month, the world breached the 410 parts per million threshold for carbon dioxide emissions, as recorded at Hawaii’s Mauna Loa Observatory – a level last estimated to have been reached three million years ago, when sea levels were 15 to 25 metres higher than now.

Prof Campbell was echoing views expressed by former president Mary Robinson late last year, when she told participants at the One Young World Summit in Canada to “eat less meat, or no meat at all” in the interests of climate justice.

“We are not half enough serious yet about the impact of changing climate,” Prof Campbell said.

Prof Campbell, who has worked in southern Africa and was previously based at the University of Zimbabwe, said he “could not see small farmers continuing to do what they used to do, due to the challenge of extreme events already occurring”.

Smallholders who had not caused climate change were already experiencing the most severe impacts, he said, and they need to be resourced.

The CCAFS programme, which he directs, has devoted time at the Galway conference to debate how to allocate its five-year budget of $0.5 billion.

One of its projects focuses on work with “climate smart villages” and involves some 22 million farmers in developing countries.

At national level, NUIG and Teagasc are working together on a research and education alliance on carbon-neutral agriculture, said Prof Charles Spillane, NUIG plant and agribiosciences research centre head.

Prof Spillane also directs a postgraduate programme on climate change and food security at NUIG which is the only one of its kind.

The five-day conference in Galway has opted to ensure there is no red meat on its own menu. Fish, white meat and vegetarian options are a deliberate choice for participants. This is not only because of the diverse dietary needs but also to focus on “sustainably sourced and low-carbon footprint” food, with the majority being halal, Prof Spillane said.

“There is growing realisation that reducing emissions from the industrial, transport and energy sector will not be enough, and emissions reductions from agriculture will be necessary if the planet is to stay within the two degrees Celsius warming limit agreed by the world’s governments,”he said.

“Recent global analyses have revealed that current agricultural interventions to reduce greenhouse gas emissions will only deliver 21-40 per cent of the two degree target by end of century, indicating the need for transformative technical and policy innovations,” he said.

Dr Andy Jarvis, flagship leader of one of the CCAFS research programmes, said that the climate-scepticism of politicians such as US president Donald Trump was disappointing, but noted that business leaders and communities already accepted climate change as a reality.

“I’m hopeful, because opinion polls still show the majority of people in the US accept climate change,” Dr Jarvis said.

“People power, and an acceptance in the private sector that businesses have to make a transition if their models are to survive, will direct the agenda,” he added.