Eye on Nature: your nature queries for Ethna Viney

A kestrel in Sutton and bog beacon in Sligo 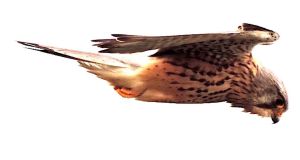 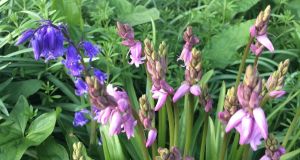 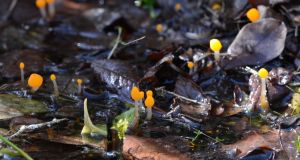 I heard the first corncrake on April 11th, seems early. There were 60 Brent geese on the Duach during the same week.

On April 5th a raft of geese, like a swarm of bees, were sitting on the sea ready to leave.

On April 9th I saw my earliest yet orange tip butterfly in Co Wicklow.

I noticed these pink bluebells in the garden growing among the other bluebells.

They are imported Spanish bluebells that come in shades of white, blue and pink.

I’m sure I saw a hummingbird hawkmoth in the garden of Fota House on Easter Sunday. Is that possible at this time of year?

There are reports of early sightings which could suggest that some might have overwintered here.

I watched this kestrel hunting recently at Red Rock, Sutton.

I photographed the attached flowers in our local bog, can you put a name to them?

The “flowers” are a fungus, bog beacon, Mitrula paludosa. It grows in wet places on decaying vegetation. It is not common but there are a few records in the Biodiversity Data Centre. There has been at least one report already from Co Sligo.

Ethna Viney welcomes observations and photographs at Thallabawn, Louisburgh, Co Mayo, F28F978, or by email at : viney@anu.ie. Please include a postal address.