Illegal dumping spotted, even as clean-up initiatives get under way 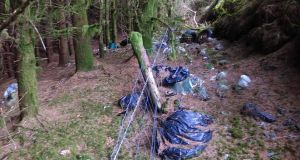 An Irish Times reader reported dumping in north Cork, and took photographs of the illegal dumping in the woods

Illegal dumping around the country is continuing, even as community clean-ups are getting under way.

A number of illegal dumping incidents in north Cork were being reported to The Irish Times’ Report Illegal Dumping (RID) campaign last weekend, just as Tidy Towns initiatives were running in the capital.

Last Saturday in south county Dublin, the Tidy Towns committees in Dalkey, Johnston and Shankill all joined forces for community clean-ups. The events were well supported by the local authority, Dún Laoghaire Rathdown Council, with the Cathaoirleach joining the dozens of volunteers. The local authority provided bin bags and organised for the collection of the rubbish.

On the same day in north Cork, an Irish Times reader took photographs of illegal dumping in woods covering three to four square kilometres in the Nadd, Lyre, Rylane and Donoughmore areas.

From the photographs it is obvious that much of the illegal dumping took place some time ago as many of the plastic bags are now covered in pine needles, grass and moss.

This is a recurring feature of many of the incidents reported to The Irish Times’ Report Illegal Dumping (RID) campaign – that local authorities are not able to keep up with the scale of the problem no matter how frequently they are reported by concerned citizens.

On a daily and weekly basis the RID campaign receives emails, Facebook posts and tweets highlighting illegal dumping issues around the country. The problem is not just an urban one.

If anything, urban local authorities seem better placed to respond swiftly to incidents of illegal dumping as the locations are easier to access.

Despite the introduction of apps, hotlines and campaigns such as Report Illegal Dumping, tonnes of uncollected rubbish remain in some of the country’s most scenic areas.

From the reports sent to the RID campaign it is obvious that the public is upset and frustrated. Very often questions are raised about which public body is responsible and what steps a local authority can take if dumping is taking place on private property.

One reader asked this week if any research has been conducted into the amount of refuse that would be expected to be produced by a large town and city and how much is actually collected? Is there a discrepancy and if so, what is being done to correct it?

Keep in touch with the RID campaign Facebook.com/ReportIllegalDumping

email pictures and details to dumping@irishtimes.com