It’s a forest of friends – hug a lonely beech tree 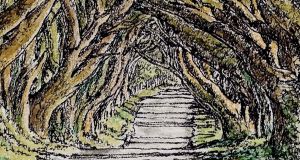 Beech trees on the Dark Hedges Road in Co Antrim, by Michael Viney for Weekend Review

Our solitary beech is the last tree on the acre to burst into leaf, well after the native oaks and ash. It bears a scant tatter of last year’s leaves, their winter glow quite faded. But thousands of new buds prick the sky, still slim and tightly wound but lengthening with every fine day.

On tiptoe, I tugged a bud down and peeled off its coppery, protective scales. And true enough, they were partly transparent, to let in the light. It’s one way, I learn, that the tree measures day length, to time the explosion of emerald impounded at the bud’s core. Beech doesn’t even start growing until there’s light for 13 hours of the day.

The brilliant green of a new-fledged beech is, for me, the spring’s most beautiful colour, and the velvety sheen of its bark can be a sculptural delight. Since we stole a small seedling from the floor of a forest, some 30 years ago, it has risen to a tree we can walk under, through a pool of summer shade.

But now, perhaps, we have to wonder if it’s lonely. That comes from reading The Hidden Life of Trees, by German forester and environmentalist Peter Wohlleben. John Banville was moved to review this warmly as “a book of marvels”, enriching any walk in a broadleaf wood. And two highly-regarded scientists give its pages an approving top and tail.

Wohlleben manages a protected forest of native beeches in the Eifel mountains of Germany. It was here he discovered the green life of chlorophyll in stone-like remains of an enormous, ancient stump. Exploring new tree science led him to decide that the surrounding beeches were pumping sugar to the stump to keep it alive.

Existence of the “Wood Wide Web”, an underground network of fungi that links the roots of separate trees and lets them communicate chemically and “socially”, has been well established and debated since the 1990s. Research on the exchange of nutrients finds links that go beyond the same species to apparent and deliberate assistance of “neighbours in need”.

Wohlleben presents his forest as a company of friends, self-aware and feeling, collaborative and with a guiding memory bank stored underground. In less impressive hands, some New Age fancy might not be far away. But Wohlleben is thoroughly reasoning, well-sourced and persuasive. He offers a totally new insight and empathy towards the life of trees.

So why might our beech feel lonely? It is, I’d guess , the only tree of its kind for many kilometres along this windy coast. It might, indeed, miss the company of the big ash that used to live close by. We had to have it felled, to restore a broadband relay to our neighbours, and we miss its bright spring leaves in the window. At the felling, ash and beech were close to brushing fingertips.

Trees in an undisturbed forest help to feed each other, says Wohlleben, to protect the environment they have shaped together, a moist microclimate proof against extremes of cold and wind. They “look after their own, and they help their sick and weak back up onto their feet. They are even reluctant to abandon their dead.”

Such sensibilities, however, are not extended to conifer plantations. Their early nursery life, he says, will “haunt the trees for the rest of their lives”. Their roots are repeatedly pruned for easier handling, and “the brain-like structures are cut off along with the sensitive tips”. This makes the trees “lose their sense of direction underground”. They grow flat plates of roots, limited in searching for nutrients and water, and giving poorer purchase when the wind blows.

A solitary beech is also weaker in a storm and, doomed to a shorter life by its exposure. In Germany’s calm and companionable old and native forests, Wohlleben grants a potential of four or five centuries to beeches and oaks alike.

But in Meetings With Remarkable Trees (most of them well spaced in open parkland) Ireland’s Thomas Pakenham was adamant: “Notorious for its shallow roots, the beech rarely lives more than 200 years. Even young trees, solid timber from top to toe, can be skittled over by a puff of wind.”

The most famous beeches in Ireland just now, a dramatic location for Game of Thrones, arch together in the “Dark Hedges” lining a road in Co Antrim. Planted 200 years ago, there were originally 150 trees, but every recent big storm has thinned one or two more, leaving now about 90 survivors.

To hug a beech, as I have found, offers a quite startling acquaintance with the strength beneath its skin. You should try it – and also read The Hidden Life of Trees.