Wrap up: showers, thunder and frost expected as temperatures plunge 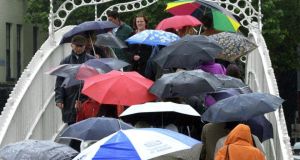 It will be windy and cold tonight with showers of rain and a risk of sleet over high ground. Photograph: PA

It’s about to get really cold with wintry showers, thunder and even frost expected. Met Éireann has said cool air is spreading from the north this afternoon leading to temperatures of 7-10 degrees across the northern half of the country and 11-13 degrees further south.

“It will be feeling much colder by this evening in fresh and gusty northwesterly winds, with a few wintry showers possible in the north and northwest later,” the forecaster said.

It will be windy and cold tonight with showers of rain and a risk of sleet over high ground. There is also a risk of thunder, especially in northern and western coastal counties with low temperatures of 0-3 degrees, leading to frost in places sheltered from wind.

Tuesday will also be cold, breezy and showery.

Forecasters said it would become less cold from Wednesday but would remain changeable and unsettled.

“Early indications are for wet and windy weather to move in from the Atlantic during Friday and Friday night, with heavy rain and strong south to southwest winds,” Met Éireann said.