'People think no one is watching': Fears of environmental damage amid travel restrictions

Wicklow ideal to restore habitats and woodland but destruction is extensive, says author 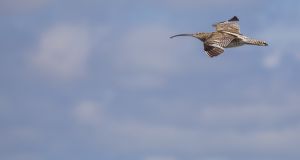 Cry of the Curlew: an increasingly rare sighting over Dublin. Photograph: Getty

Ravens in the Wicklow Mountains feed off carcasses of dead sheep, but a richer variety of bird life could thrive if the area could be free from the annual scourge of illegal wildfires, say conservations.

Last month fires laid waste to 16sq km of Wicklow scrubland, blazing through habitats in the middle of nesting and breeding season.

“Wicklow is an absolute disgrace,” says Pádraic Fogarty, author of Whittled Away – Ireland’s Vanishing Nature, who has tracked the fires over several years. The area would be an ideal location to restore habitats and develop woodland but the amount of destruction has been extensive – species such as curlews haven’t been seen there in years, says Fogarty. “The birds are long gone.”

Conservationists fear Covid-19 travel restrictions could lead to more environmental damage this year. “We’ve got reports of all kinds of stuff going on because people think no one is watching,” says Fogarty, who is also spokesman for the Irish Wildlife Trust.

The organisation has so far received tip-offs about someone building a road through a sand dune special-conservation area, unauthorised dredging works and smaller scale habitat removal.

“The big problem is that rangers are not really out and about,” says Fogarty. “They can only go out if a crime has been reported.”

Landowners who burn scrub usually do it about now. The vegetation will dry out after a spell of fine weather, making it combustible. Later in the summer foliage has appeared and it is less flammable. Nonetheless, it is illegal to burn vegetation from March 1st until August 31st; the prohibition is designed to protect bird and other wildlife habitats during nesting and breeding season.

“The repeated burning has greatly reduced the diversity of vegetation with knock-on impacts on invertebrates,” says Fogarty. Sheep grazing, land drainage and industrial forestry also contribute to the problem.

Back in the 1950s and 1960s, a broad diversity of bird life existed in the area. This is now pretty much gone, with only a few species remaining. “You see a lot of ravens because they eat the dead sheep,” says Fogarty.

What can be done?

There needs to be some carrot to go along with the stick to encourage landowners to restore habitats, he says. On the plus side, he notes, there are fewer reports of fires in other counties compared to the period 2015-2017.

The Irish Wildlife Trust wrote to three farming organisations in April, after the Wicklow fires, with suggestions on how to preserve special areas of conservation.

The ideas included payments for farmers to restore natural habitats (peatlands or woodlands) with no farm animals; a “high nature value” scheme for the uplands for farmers who would prefer to have animals and funding to the National Parks and Wildlife Service so they can provide science and ecological advice to farmers as well as producing management plans for protected ecological areas.

Fogarty says a rewilding plan over the next 20 years would transform the landscape: positive results would be evident in the short term and eventually the area would return to native woodland and bog.

Meanwhile, Dublin City Council has asked people to take care while walking around beaches to avoid disturbing birds, such as the ringed plover, which are now nesting. “Great news,” tweeted the council last Thursday. “We have birds nesting on our beaches at the moment.” It urged visitors to “please watch where you’re walking or cycling and keep dogs on leads at all times”.

BirdWatch Ireland also has information online at https://birdwatchireland.ie/ for what to do if you find a lone baby bird outdoors during nesting season, with the advice in most cases being to do nothing.