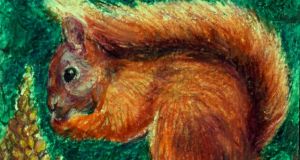 The narrow entry corridor for grey squirrels at Sutton Cross offered hope for the reds at a crucial balance in their breeding.

Where viruses came from, in all their diverse billions in a teaspoonful of sea, a forkful of soil, is still mysterious, even to virologists.

In one hypothesis, they mght have been archaic, free-living organisms that evolved into parasites; in another, they started as fragmentary genetic elements that united to move between cells and invade them. Either way, they reproduce, spread, and evolve to do it more effectively.

Why some viruses evolve to cause disease is another mystery. But infectious diseases can limit or reduce populations of humans or wildlife .

Researching last week’s column, for example, innocently prompted by the chirping of sparrows, I was led to the latest scientific hypothesis on their modern city decline. It proposed infection by a parasite, found at high levels in the sparrows of suburban London and giving them avian malaria.

Today’s column prompted by wondering about the last red squirrels of Dublin’s Howth Head. Have they finally succumbed, like so many in Leinster, to the advance of alien grey squirrels?

Even a decade ago, the native reds had already disappeared from many Dublin parks. At the Phoenix Park, for example, the first grey was sighted in 1979 and the last red around 1987.

On the Howth peninsula, the reds’ last stronghold in Dublin, the first greys were seen in 2007. In 2011, an assessment for Fingal County Council by ecologist Dr Wiliam Carr, estimated some 25 remaining in the woods.

The narrow entry corridor for grey squirrels at Sutton Cross offered hope for the reds at a crucial balance in their breeding. Grey squirrels were regularly removed from the peninsula by Dr Carr, rising to 38 in a year. But his traps caught only two male reds. The Howth colony, he reported in 2017, “will not recover”.

Grey squirrels have been commonly thought to oust the reds by competition for acorns and beech nuts. A more insidious reason, as seen in the UK, is cross-infection with the squirrel-pox virus, SPQV. The greys can carry this without much effect, but it’s fatal to the reds, afflicting them with something like the rabbit myxomatosis.

Although the American greys were introduced to Ireland at Castleforbes, Co Longford, in 1911, SPQV was not discovered until 2011, found in two grey squirrel populations in Northern Ireland. At one location, 90 per cent of the reds were infected and lost.

In 2012 came reports from Co Wicklow and Co Dublin. Testing levels of virus in greys from these areas, a team from UCD warned of “a wave-front of grey squirrel expansion from Wicklow” to threaten the surviving eastern reds.

By 2012 just three reds – two males and one female – survived on south Dublin’s Killiney Hill. However, with greys removed by Dr Carr, that year saw reinforcement. Fifteen reds, brought from the Raven Point nature reserve in Wexford, were released in a move supported by the National Parks and Wildlife Service.

Elsewhere in Ireland, and notably in the midlands, the resurgence of the pine marten, a native predator, has proved a potent ally in removing grey squirrels and allowing the smaller, more agile, reds to share the woods.

But meanwhile, another wildlife virus has arrived in Ireland, threatening not only wild rabbits but also the Irish hare.

This is RHD/RHD2, joint acronyms for rabbit haemorrhagic disease, a horror like myxomatosis. The first form killed millions of farmed rabbits in China in 1984 and then spread globally. RHD2, a form killing rabbits even faster, emerged in France in 2010.

Moving west 40-odd years ago brought me encounters with dying rabbits, blundering around my feet in the dunes

RHD was found in domestic rabbits in Ireland in 2018 and in wild rabbits in July last year; RHD2 killed a hare on the Wexford Slobs nature reserve in August and another 17 fatally infected hares were found in eight weeks after that. The disease has been confirmed from at least eight counties, from Cork to Leitrim.

Apart from the trysts of mating, the Irish hares lead solitary lives. But rounded up in nets for coursing, contagion could be inevitable. The first deaths from RHD2 last summer brought an immediate ban on coursing from Minister for Heritage Josepha Madigan.

By October, however, a deal was reached with the Irish Coursing Club. A ban remains on netting within a 25km radius of finding the disease in hares or rabbits. It was lifted for Kilkenny and for other clubs enlisted in a hare monitoring programme supervised by vets.

Moving west 40-odd years ago brought me encounters with dying rabbits, blundering around my feet in the dunes. They were victims of myxomatosis, imported by Irish farming interests. Natural selection of survivors brought their species eventual genetic resistance, as it will beat the even deadlier numbers game of RHD2.

There are vaccines against the virus for domestic rabbits, but these remain untested for wild rabbits or hares and netting them for injection is thought too risky. I watch their solitary scampers on the hillside – a sign of the wild I hope will never grow less.