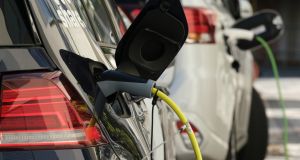 Electric vehicles (EVs) in circulation in Europe emit three-times less carbon dioxide on average than petrol and diesel cars once the impact of driving, power generation and battery production are factored in.

That is the conclusion of the green NGO Transport & Environment (T&E) in a study which took into account “all possible criteria” to make the comparison, including when electricity is produced or fuel is burnt, as well as raw materials used in making batteries.

It has also developed a tool that compiles all the most up-to-date data on CO2 emissions linked to the use of an electric, diesel or petrol cars – including the impact of particular models.

“We have taken into account all possible criteria such as the amount of CO2 emitted when electricity is produced or fuel is burnt, as well as the carbon impact of resource extraction for batteries or of building a power plant,” explained T&E’s transport and emobility analyst Lucien Mathieu.

“We find out that electric cars in Europe emit, on average, almost three times less CO2 than equivalent petrol/diesel cars.”

“We also see that electric cars will reduce CO2 emissions four-fold by 2030 thanks to an EU grid relying more and more on renewables,” he added.

“This tool puts to rest the myth that driving an electric car in Europe can be worse for the climate than an equivalent diesel or petrol. It’s simply not true,” Mr Mathieu said. “If European governments are serious about decarbonising during the crisis recovery, they must speed up the transition to EVs.”

The tool will be updated as new data is available, he confirmed. It is accessible here.