Building work gets under way on Liffey cycle route

Additional cycle and pedestrian spaces being introduced throughout the city 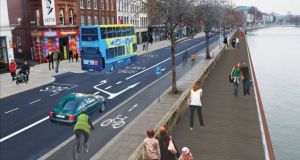 Steamrollers have taken to the Dublin city quays to finally begin work on the Liffey cycle route, which was first proposed almost eight years ago.

Dublin City Council is taking advantage of the much reduced traffic volumes in the city during the coronavirus pandemic to get working on the segregated path, that will eventually run from Phoenix Park in the west to the 3Arena in the east.

The need to reallocate more space to pedestrians and cyclists so they can safety maintain social distancing has also spurred the council into developing the route more quickly than planned, Brendan O’Brien of the council’s traffic department said.

“We are undertaking various Covid-19 related measure to provide for safe cycling and more space for pedestrians and in this case the interim Liffey cycle route is progressing a lot quicker than previously anticipated.”

Work is under way this week at Inns Quay, opposite the Four Courts, and Ormond Quay, from the courts to Capel Street. Car parking at the quayside has been removed and the road is being resurfaced for the riverside section of the route.

“The road surface was in poor condition where the cars were parked, so once that resurfacing work is completed, it will be replaced with the cycle track, which will be protected by a continuous fixed structure about half a metre high.”

The next stage will involve minor road works to take the route to and from the riverside to the sections where it runs along the other side of the road beside buildings.

The current work, which will concentrate on the area between the Phoenix Park and the Custom House, will involve the removal of traffic lanes in some sections and is expected to be completed by August.

While the route will be fully segregated on the north quays, cyclists will continue to share with buses on sections of the south quays until the full permanent route, which involves additional boardwalks over the river, is completed by the National Transport Authority in 2024.

A new contraflow cycle lane is also being installed this week on Nassau Street and, when completed will run from Clare Street, beside the National Gallery to Dawson Street.

This work is part of Covid 19 distancing measures, and will also involve the reallocation of roadspace to pedestrians on both sides of the road.

There was a particular need to increase pedestrian space on the Trinity College side by removing bus parking, so that walkers could pass safely when people were queuing for buses. This would become increasingly important as people returned to the city centre in the coming months, Mr O’Brien said.

“Nobody knows how long this is going to last, but we are assuming the distancing measures we are putting in place here and throughout the city, will be in place for a year and a half. In some places they may then be unwound, but others may be permanent.”

The council last week requisitioned parking spaces for pedestrians outside shops at five locations, on Dorset Street, Stoneybatter, Capel Street, Fairview, and Rathmines. Similar work is underway in Ranelagh this week and additional spaces are being reallocated in Rathmines, Mr O’Brien said.

“We have an online form where people can request locations, and we have already had a raft of requests which we are assessing at the moment.”