‘Is it possible a cuckoo pushed eggs out of another bird’s nest?’ 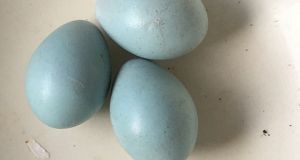 We found these three blue eggs, one by one and perfectly intact, on the ground near two trees. Next day I heard a cuckoo. Is it possible a cuckoo pushed them out of another bird’s nest?

The eggs look like those of the dunnock, and cuckoos lay in dunnock nests.

I watched a blackbird with three or four items in its beak. It went to my pond and dipped them into the water, wriggling them around as if washing them.

Blackbirds, crows and some other seed-eating birds are known to wash their food.

I saw what looks like a miniature beehive inside my shed with a wasp going into it.

It’s the queen wasp starting a nest, where she will rear a first brood of workers.

I found this dead rodent on our lane. Its body was about 20cms long and the tail about 15cms.

It was a stoat, which is a mustelid, not a rodent.

I found this insect on a potato leaf in my plastic tunnel.

It’s the nursery web spider. The female cocoons lays her eggs and stays with the cocoon until they hatch and disperse.

Oscar (10) and Hugh (13) Morgan in Dublin also found a nursery spider in the garden.

I found bees in my house and buzzing around outside. They look like honeybees but are lethargic and I don’t think they sting.

It’s the narcissus fly, a hoverfly that mimics bumblebees. The larvae live in the bulbs of various members of the narcissus family and cause severe damage to them.

1:56 Coronavirus: Cabinet meets to consider advice over actions to take in Midlands as cases rise

1 Coronavirus: Cabinet meets to consider advice over actions to take in Midlands as cases rise
2 Officials refuse to rule out ‘Midlands lockdown’ following Covid-19 surge
3 Second Midlands GAA club shuts down activity after outbreak among players
4 Masks Q&A: Who has to wear them in shops and what happens if you don’t?
5 Reopening of schools in many EU countries has not led to Covid-19 increase, ECDC report finds
Real news has value SUBSCRIBE