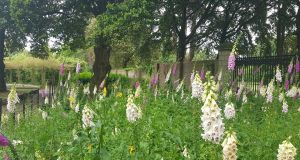 Dublin city is going wild following the decision of the city council to reduce mowing and phase out the use of chemicals in parks and grasslands.

Wildflowers, which in the past the council considered weeds, are being allowed to flourish on roadside verges, open spaces, in parks and cemeteries the council said.

What it described as the “wilding” of these green areas has allowed previously suppressed species such as clover and dandelion to grow and provide habitat and food for insects, bees and other pollinators.

Bulbs were also being planted, chief parks superintendent Les Moore said.“The reduced frequency of mowing in many areas has been supplemented by the mass planting of bulbs to take areas out of the mowing cycle for a number of months. These bulb mixes that herald the arrival of spring are visible at the moment and include muscari, gladiolus, camassia, tulips and allium as well as daffodils.

“These combinations of bulbs flower well into May and are cut back mid to late June. We are also trialling various wildflower seed mixes which will last well into autumn and would require cutting only once a year.”