Northwest Europe suffering one of its darkest winters on record 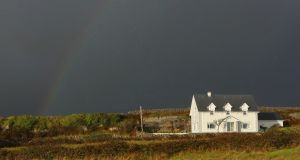 Northwest Europe is suffering one of its darkest winters since records began due to a seemingly never-ending series of low pressure systems shrouding us in cloud since late November. Photograph: iStock

Northwest Europe is suffering one of its darkest winters since records began due to a seemingly never-ending series of low pressure systems shrouding us in cloud since late November.

If you live in Brussels, 10 hours and 31 minutes was your lot for the entire month of December. The all but benighted inhabitants of Lille in France got just two hours, 42 minutes through the first half of January.

“A star has been kidnapped. We still have no sign of life from the sun.”

Belgium’s Royal Meteorological Institute has declared December 2017 “the second darkest month since 1887”, when it began measuring, after the 10.5 hours of sun recorded at its Uccle weather station last month were beaten only by a bare 9.3 hours in 1934.

Things weren’t too bright in Ireland either. Met Éireann reported below average overall levels of sunshine throughout December.

The lowest total, just over 20 hours, was recorded at Valentia in Co Kerry while the highest total was 59 hours at Dublin Airport.

Monthly sunshine totals in other measurement stations ranged from 24.5 hours at Knock Airport in Co Mayo to just under 54 hours at Shannon Airport in Co Clare.

France’s northern Hauts-de-France region did better than other areas with 26 hours of sunshine in December, but that was against a norm of 48.

But Meteo France described the paltry 2.7 hours of sun recorded from 1st to 13th of January in Lille, the region’s biggest city, as “exceptional”.

The January average stands at 61.4 hours, according to the agency - meaning Lille and its unfortunate residents were deprived of perhaps 30 hours’ worth of rays in the first part of the month.

The previous low of 13 hours, dating back to 1948, could well be beaten, Frederic Decker of Meteo News told La Voix du Nord this week. “The forecast isn’t looking too great,” he said. “The weather’s going to stay pretty damp and dull.”

Rouen in Normandy had an even more depressing first half of the month, with just 2.5 hours of sunshine compared with a full-month norm of 58.6, Meteo France said, while Paris’s 10 hours were also a far cry from the 62.5 hours the capital usually averages in January.

Even southern French sun-traps such as Bordeaux and Marseille fell a very long way short of their usual ray quota in the first half of the month, basking in just 10.3 and 26.9 hours respectively against monthly averages of 96 and 92.5.

Health experts say a shortage of sunshine can lead to seasonal depression, whose symptoms include a lack of energy, a desire to sleep and a perceived need to consume greater quantities of sugar and fat.

“Exposure to morning light inhibits the secretion of melatonin that promotes sleep and favours the production of hormones that will stimulate the body,” Matthieu Hein, a psychiatrist at the Erasmus Hospital in Brussels, said.

In the absence of light, we are “rather slow, tired, which is characteristic of SAD, or seasonal affective disorder”.

Florent Durand, who runs a massage studio in Lille, told France 3 TV that his €39 light therapy sessions were booked out.

The inhabitants of northwest Europe, however, can count themselves lucky. Moscow recorded just six paltry minutes of direct sunshine in the whole of December, shattering the previous record low of three hours, set in 2000.

The Russian capital normally averages a bleak 18 hours of sunshine in the last month of the year.

“The darkest month in the history of our weather observations. When they hear this, people will say: ‘Now I know why I was depressed.’”

The daily Moskovsky Komsomolets reported a surge in visits to psychiatrists.