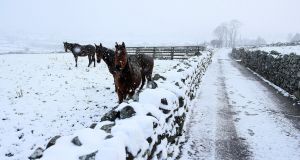 A status yellow weather warning for snow and ice is in place across Ireland on Thursday morning until midday.

The highest accumulations are expected in Ulster and north-west Connaught.

Gardaí are reporting very poor conditions in many parts of the country and have advised motorists to use major routes as much as possible.

Donegal is reporting very poor conditions on roads around the county due to frost and ice with extreme caution advised on main and secondary routes.

Icy conditions are being reported on most main and secondary routes including around Strokestown, where gardaí have been dealing with a crash.

Temperatures on Friday will be between 3 and 6 degrees. There is a further possibility of sleet and snow in the northern half of the country on Saturday mostly on higher ground.

There is also a chance of snow at lower levels in parts of Ulster and north Leinster.

The forecast suggests the cold snap will end on Saturday night to be replaced by heavy rain across the country on Sunday. It will be much wilder than of late with highs of between 10 and 13 degrees. It will remain unsettled into next week.