Michael Viney: Ecocentrism has had to bide its time

To any naturalist, Homo sapiens is a predator long out of balance with the rest of nature 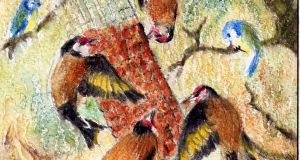 The goldfinches hung on like trapeze artists, swinging back and forth until an ultimate gust tore both birds and feeder from the twig. They blew like leaves in the wind, swirled across the hill and disappeared. When things calmed down, with fresh peanuts, they were back, now almost a dozen strong.

I chose the hawthorn twig carefully outside my workroom window, so that I have to lean sideways at my desk to see what’s at the nuts. Much of the time it is goldfinches, squabbling and fluttering, their colour and beauty impossibly distracting at the corner of the eye.

These birds are quite new to many gardens, the peanuts and nyjer seeds tempting them away from the wild seed-heads their beaks were made for. Delighting the human eye is not what goldfinches were made for, yet this value supports a bird-feeding industry now worth many millions.

Ecocentrism goes even further than deep ecology to include the geology, oceans and atmosphere of Earth

To think of values unrelated to human use and extended to all of nature’s species can be more challenging. “Intrinsic” is the word for such values, defined in my dictionary as “belonging naturally; essential”.

It caught my eye in Laudato Si’, Pope Francis’s recent letter on conserving the environment. Ecosystems, he wrote, “have an intrinsic value independent of their usefulness. Each organism, as a creature of God, is good and admirable in itself”. He urged respect, too, for “the intrinsic value of the world”.

Both uses sent me back a few decades to the writings of Arne Naess, the Norwegian philosopher who conceived “deep ecology”, the movement that inspired many young American radicals and poets in the 1970s. It also helped to colour my own desertion of urban life.

An essay by Naess and ecologist George Sessions set out an ethical platform for moving “from shallow to deep ecological philosophy”. Its first article read: “The well-being and flourishing of human and nonhuman life on Earth have value in themselves (synonyms intrinsic value, inherent value). These values are independent of the usefulness of the nonhuman world for human purposes.”

Another point might similarly have given the pope no pause: “Humans have no right to reduce this richness and diversity except to satisfy vital needs.”

Article five of the ethical platform, however, might have caused Francis problems: “the flourishing of human life and cultures is compatible with a substantial decrease of the human population. The flourishing of nonhuman life requires such a decrease”.

Nearly 40 years on, as the human population heads for 11 billion by the end of this century, deep ecology now inspires the movement that calls itself ecocentrism. This is in contrast to anthropocentrism, or human-centred, and reacts to the Anthropocene, the new scientific era of a planet changed by man.

“Clearly,” wrote Pope Francis, “the Bible has no place for a tyrannical anthropocentrism unconcerned for other creatures.”

Attenborough has argued that, to limit population growth, women should be given political control of their bodies

But ecocentrism is independent of religious faith. It goes even further than the life-centred, or biocentric, focus of deep ecology to include the geology, oceans and atmosphere of Earth.

Its range can be sampled in a new free-to-access online journal called the Ecological Citizen (ecologicalcitizen.net), edited by Patrick Curry, author of the academically well-received Ecological Ethics (2011). The journal is peer-reviewed, stimulating and visually enjoyable.

Its explanation of ecocentrism offers a few tests of acceptance: “if you see, for instance, the destruction of a mountaintop for mining being a deeper wrong than merely reducing the amenity value of the landscape, then you are thinking ecocentrically.”

Sir David Attenborough, for one, would not disagree. He has argued that, to help limit population growth, women should be given political control of their bodies. To any naturalist, Homo sapiens is a predator long out of balance with the rest of nature and the carrying capacity of much of the planet.

Around the same time that I began reading Arne Naess, an Australian philosopher, John Passmore, wrote Man’s Responsibility for Nature (1974). He took particular issue with the views of the English ecologist, Sir Frank Fraser Darling, who feared human priorities that decided the survival of the rest of the natural world.

“It is at this point,” wrote Passmore, “that the cry grows loudest for a new morality, a new religion, which would transform man’s attitude to nature, which would lead him to believe that it is intrinsically wrong to destroy a species, cut down a tree, clear a wilderness . . . these demands strike one, at a certain level, as merely ridiculous.”

Ecocentrism has had to bide its time.