A protest march against the destruction caused by out-of-control gorse fires is being organised in Kenmare, Co Kerry 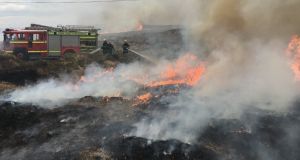 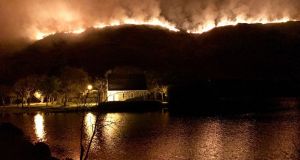 A gorse fire in Gougane Barra valley Co Cork, covering some 4km at its peak, burnt out “the entire middle section” of a scenic valley, according to a rural hotel boss. More than 30 firefighters tackled the inferno through the night, protecting a house and “a large area of forestry”, believed to be some 300 acres, the service said. Photograph: Neil Lucey/PA WireNOTE

No farmer with illegally burnt land, including areas of conservation, upland and commonage, has lost out on single farm payments, the Irish Wildlife Trust (IWT) has found, as a local protest against wild fires is planned for this weekend in Kenmare, Co Kerry.

Under Department of Agriculture rules farmers with burnt land are ineligible for the single farm payment.

In 2014 farmers were warned by the Department of Agriculture not to be tempted to clear land by uncontrolled burning in order to be eligible for single farm payments.

Any farmer found engaging in illegal burning would risk the loss of their single farm payment, then Minister of State for Agriculture, Tom Hayes warned.

Special areas of conservation were protected by both national and EU legislation, and scrub removal was prohibited without prior approval from the National Parks and Wildlife Service, farmers were also told.

It is understood Department of Agriculture inspectors have visited many of the burnt-out areas since the so-called cross compliance rules were tightened in 2015 .

Under the Department of Agriculture’s cross-compliance system, to receive a payment under the single payment scheme farmers must follow regulations on the environment, animal health, plant health, animal welfare and land maintenance.

However the IWT, by way of a freedom of information request, has found that no one has lost out on a single farm payment.

It also reveals that 57 wildfires have taken place across the country this year and almost all took place in March and April, the period when burning was illegal.

Over half the wild fires were in designated areas of conservation, including two national parks – Killarney National Park, and the Wicklow Mountains, the Irish Wildlife Trust has found.

“Farmers with burnt land are ineligible for the single farm payment and yet, in a freedom of information request from the Department of Agriculture, Food and the Marine, the IWT learned that no farmer was penalised in 2016 under the so-call ‘cross compliance’ rules,” it said in a statement on Thursday.

Padraic Fogarty, the conservation body’s campaigns officer, says the IWT is contacted “on a daily basis” by local people in affected counties – yet the deliberate fires continue.

The IWT says it is time for a senior Government minister to show leadership and call for a stop to it.

Meanwhile, a protest march against the destruction caused by out-of-control gorse fires is being organised in Kenmare, Co Kerry, for Saturday, April 29th.

There will be a silent march around the town, followed by speeches in the fair green in the town square.

The protest is organised by wildlife filmmaker and naturalist Vincent Hyland, who said the protest is not anti-farming, but is calling for a new approach that to prevent the devastation to biodiversity and upland habitat that the fires have caused.

The protest begins in the square Kenmare at 2pm on Saturday.