Ireland in state of ‘absolute drought’ as heatwave continues 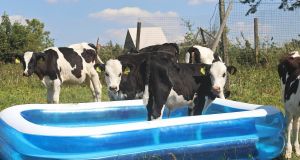 Come in the water's fresian: Calves on John Tilson’s farm at Gartnaskill, Co Cavan, cool off in the warm weather. Photograph: Lorraine Teevan

The vast majority of the country officially enters a state of “absolute drought” today with no rainfall recorded at 24 out of 25 weather stations during the last two weeks.

The extreme weather conditions have prompted Irish Water to expand a hosepipe ban from the Greater Dublin Area to the whole  country from Friday morning.

From 8am on Friday the use of hoses in nearly all circumstances will be banned across the country. Irish Water warned the ban will likely continue until at least July 31st in order to allow water sources to replenish themselves.

The hot dry spell is expected to continue for the foreseeable future with Met Éireann saying it does not expect any rainfall within the next 10 days.

On average, demand across all water resources nationally has increased by 15 per cent, a level Irish Water said “cannot be sustained for any period of time”.

An absolute drought is defined as 15 or more consecutive days of less than 0.2mm of rainfall. The weather station at Belmullet, Co Mayo, is the only one of the State’s 25 stations to record any rainfall in the last two weeks, though some brief showers were reported in Munster yesterday evening.

Senior meteorologist John Eagleton said there would be “practically nothing” in terms of rainfall for the next 10 days, the maximum time period for which Met Éireann can make predictions.

Yesterday, temperatures hit a maximum of 23 degrees, with the midlands experiencing the warmest conditions. The weekend will see temperatures of up to 30 degrees, “a notch below” those seen last week, according to Mr Eagleton.

The average top temperatures will be around 27 or 28 degrees. Humidity levels will remain low meaning the heat will not be clammy or sticky, he said.

High demand combined with high levels of evaporation caused by the uninterrupted sunlight has caused significant depletion of rivers, lakes and reservoirs, some of which may take months to recover, Irish Water said.

The ban covers the use of hoses to water gardens, wash cars or fill paddling or swimming pools. Households ignoring the ban can be fined €125, and prosecuted if they fail to pay the fine.

A hosepipe ban introduced in the Greater Dublin Area on Monday has helped reduce demand from 615 million litres a day to 578 million litres.

Engineers Ireland warned yesterday periodic water shortages will continue in Dublin unless water is pumped over from the river Shannon. Water resources are “inadequately maintained, unable to meet peak demand and requiring significant investment”, the group warned in a report.

Yesterday parents were told to take “extreme care” in protecting their children from the sun’s harmful rays during the heatwave. The Marie Keating Foundation cancer support group said infants and children should be kept out of the sun between 11am and 3pm and factor 50 sunscreen should be applied every two hours.

The Dublin Society for the Prevention of Cruelty to Animals has said it has received numerous reports of animals being trapped in the heat including about 30 horses tied up in fields with no access to shade and water. The society has also responded to four cases of dogs trapped in cars in the heat.