Denis Naughten recommends opting out of directive on GMOs 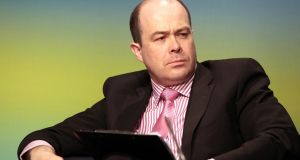 Minister for the Environment Denis Naughten: GMO cultivation-free status is “a key element of our international reputation as a green, sustainable food producer”. Photograph: Brenda Fitzsimons

A proposal “to restrict or prohibit” cultivation of crops containing genetically modified organisms (GMOs) is to be put to the Cabinet on Tuesday by Minister for the Environment Denis Naughten.

Mr Naughten has recommended opting out of an EU directive on GMOs on the basis that it is critically important Ireland takes “whatever steps are necessary” to maintain our GMO cultivation-free status. He said that status is “a key element of our international reputation as a green, sustainable food producer”.

The transposition of Directive 2015/412 enables Ireland to opt out of cultivation of GMO crops, approved for cultivation elsewhere in the EU on a much wider range of policy grounds than had previously been the case.

In a previous directive, member states were obliged to allow the growth of crops from GMOs, where specific projects have been approved by the European Food Safety Authority.

While GM foods and feeds are widely used in the US and Asia, only one genetically modified crop is authorised for cultivation in the EU, a GM-maize variety, though a number of GMOs have been authorised for consumption, mainly in animal feed. Some member states have banned GM crops.

The transposition will affect only the cultivation of “live” GMOs in this country, according to Mr Naughten. It has no implications for other sectors of the economy where GMO products play a vital role, such as in the biotechnology and pharmaceutical sectors and in food and feed.

While it was his intention to apply the opt-out provision, it is understood he will keep the matter of Ireland’s GMO cultivation policy under review, in consultation with Government and in light of scientific developments in what is a rapidly evolving sector.