Ireland could ‘keep lights’ on with 100% renewable energy 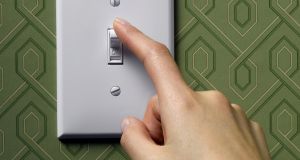 It is possible ‘to keep the lights on with 100 per recent renewable energy’ while causing minimal disruption to lifestyles, a UK energy expert has said.

It is possible “to keep the lights on with 100 per recent renewable energy” while causing minimal disruption to lifestyles, a UK energy expert has said.

Paul Allen, of the Centre for Alternative Technology, told the Oireachtas committee on climate action and environment on Tuesday that “powering up renewable energy” could produce a robust, reliable energy system that is not reliant on fossil fuels.

Mr Allen is currently leading a campaign to establish a “zero-carbon” Britain and addressed the committee as part of its review of the 2018 Climate Emergency Measures Bill, which proposes a ban on the future granting of licences for fossil fuel exploration and extraction in Ireland.

He said their research showed use of renewables such as onshore and offshore wind and solar panels could be optimised to deal with peaks and troughs in electricity demand at any time of the year.

Mr Allen admitted there was also a need to “power down energy consumption” and claimed Zero-Carbon Britain had shown a 60 per cent reduction over two decades was possible.

While a 15 per cent shortfall in energy availability was predicted in electricity, this could be met by emerging energy storage options and technology capable of generating synthetic methane – a form of renewable gas.

“Our research shows that by making changes to our buildings, transport systems and behaviour, and by investing in a variety of renewable energy generation technologies...we can provide a reliable zero-carbon energy supply without negatively impacting on quality of life.”

The scale of emerging opposition to the Bill was indicated, however, by submissions from the Department of Communications, Climate Action and Environment (DCCAE); the Sustainable Energy Authority of Ireland (SEAI) and utility companies; notably Gas Networks Ireland (GNI) and Ervia.

Matt Collins, a senior official at DCCAE, said an exploration ban would undermine efforts to provide a sustainable, stable and cost competitive energy system in Ireland.

He pointed to UCC Centre for Marine and Renewable Energy research, which concluded that even with a 80 per cent reduction of CO2 by 2050, Ireland would still be using significant amounts of oil and gas – though its role would be small, and combined with the use of “carbon capture and storage”.

“It simply does not make sense to ban exploration for Ireland’s resources and make Ireland 100 per cent dependent on imports for our fossil fuel needs in the future,” Mr Collins said.

The Bill was “laudable but flawed”, said Denis O’Sullivan, managing director of GNI, which is responsible for the national gas network. Natural gas, which would be replaced over time by the renewable gas biomethane, had to be part of Irish energy mix, he said.

Jim Scheer, SEAI’s head of low carbon technologies, said a significant programme of fossil fuel reduction was needed, “starting now, to reduce emissions resulting from servicing heat demand and generation of electricity”. There was an ongoing role for natural gas, but only with major decarbonisation across the economy while also achieving much greater energy efficiency.

Green Party TD Eamon Ryan said he disagreed with climate model projections indicating fossil fuels had to be part of the mix for decades to come. The Bill “stopped the problem at source” and would make a contribution to reducing global emissions, regardless of how this was accounted for at EU level.

Oil Change International research director Greg Muttitt said the Bill was a necessary step to avoid the most destructive impacts of climate change. “If the world is to achieve the Paris climate goals, all new investments must be in clean energy, which is already cost-competitive with fossil fuels,” he added.

The Bill’s sponsor, People Before Profit TD Bríd Smith, said: “Time is running out to tackle climate change, we are rapidly eating into the carbon budget and with that into any hopes of limiting temperature increases to under 2 degrees in line with the Paris Treaty.”

Ms Smith said she believed the Bill would be enacted in spite of Government opposition.

“In itself this is a pretty modest proposal, but it can have huge significance globally. It would send a message that the game is up for fossil fuels and that we need massive investments in renewables, in energy efficiency and in public transport.”