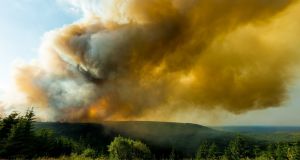 Irish Water’s hosepipe ban is to be extended nationwide on Friday with fewer than 20 domestic users having been reported for water misuse since the measure came into force in the greater Dublin region on Monday.

The utility called on commercial entities to be “mindful” of water usage as the State remains in a period of “absolute drought” and with no rain forecast for the next 10 days.

No rainfall has been recorded at 24 of Met Éireann’s 25 weather stations during the last two weeks. Belmullet weather station in Co Mayo was the exception.

An “absolute drought” is defined as 15 or more consecutive days of less than 0.2mm of rainfall.

The dry weather has prompted Irish Water to extend its hosepipe ban nationwide from 8am on Friday. Irish Water warned the ban would likely remain in place until at least July 31st.

Those found flouting the ban can be fined €125 and prosecuted if they fail to pay the fine. Irish Water said the measure had helped to reduce demand from 615 million litres a day to 578 million litres.

John Eagleton, senior meteorologist with Met Éireann, said there would be “practically nothing” in terms of rainfall for the next 10 days, the maximum time period for which Met Éireann provides forecasts.

Kate Gannon, Irish Water’s corporate affairs manager, said it would “take weeks and months” for water sources to recover from the dry spell.

“We have seen a reduction in demand and we would like to see that continue over the coming weeks,” she said.

Despite the warnings, supermarket chain Lidl said its 7,500 litre swimming pools had sold out within hours of going on sale on Thursday.

“Unfortunately due to unprecedented demand the above item has sold out much quicker than we could have anticipated,” it said. “Stock for this promotion was bought and the sales date planned nearly a year in advance.

“Whilst we apologise to customers who have been disappointed, we would ask customers to be respectful towards our employees who have no control over availability.”

In response to queries from The Irish Times, a spokeswoman for Irish Water said less than 20 domestic users have been reported for water misuse.

“Irish Water continues to review the situation and asks that everyone, including commercial entities, are mindful of their water usage,” she said.

“The water conservation order relates to domestic customers only but again we will continue to review this in conjunction with reviewing the weather situation in the coming days and weeks.”

Irish Water also said it was making two tanker trips per day to Inis Oirr off the west coast as the volume of visitors meant the population was increasing on summer weekends from the usual 150 to some 2,000.

The conditions have led to the outbreak of wildfires in many parts of the State. Coillte said fires were tackled on Thursday in the Slieve Bloom Mountains in Laois/Offaly, where a large area was burned after a blaze spread into a forest from open moorland.

Offaly Fire and Rescue Service shared an image on its Facebook page of a baby fawn that was rescued from the Slieve Bloom blaze on Wednesday.

There was also a “significant fire” in Kildalkey, Co Meath, as well as others in the Dublin Mountains.

Following a request from civil authorities, the Air Corps said it responded to requests for assistance in Dublin, Wicklow, Limerick, Cork, Tipperary and Offaly. It dropped approximately 300,000 litres of water using specialised equipment.

Agusta Westland AW139 helicopters were utilised as they can be equipped with a “Bambi” bucket aerial firefighting system capable of dropping 1,200 litres of water per pass.

“This amount of water, concentrated in small areas, makes an immediate impact on wildfires,” it said. “These operations are ongoing and the Defence Forces are prepared to continue firefighting operations in support of our communities.”

Irish Water Safety, Coast Guard and RNLI issued a joint appeal reminding the public to stay alert to the risk of drowning. On average, five people drown in Ireland every fortnight and the risks increase during July and August.

Meanwhile, Inland Fisheries Ireland appealed to anglers and fishery managers to voluntarily cease salmon angling on catch and release rivers with immediate effect due to high water temperatures and the current drought conditions.