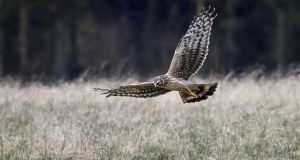 The hen harrier is among the birds that BirdWatch Ireland says will be threatened by the new legislation. Photograph: iStock

The passing of legislation that will expand the period during the year allowing for the burning of vegetation and the destruction of hedgerows signals a weakening of the laws protecting bees, birds and other animals, the conservation charity BirdWatch Ireland has said.

The Heritage Bill was passed in the Dáil on Wednesday.

It contains provisions which will alter the dates of the closed period for the burning of vegetation and ‘the cutting, grubbing, removal and otherwise destroying of hedgerows’ contained in Section 40 of the Wildlife Act (1976 and amended 2000).

Birdwatch Ireland said the legislation, which would be implemented through as-yet unseen regulations, would allow burning of uncultivated land including mountains and hills in March, extending the open period for burning by one month.

The provision would last for two years before review and potential continuation by Oireachtas approval.

BirdWatch Ireland said the extension of burning in March could negatively impact threatened bird species such as curlew and hen harrier which would have returned to the uplands to begin their nesting activities at that time.

It noted the extension to the burning season had been proposed as a measure to stop out-of-control fires such as those seen in Cloosh Valley in 2017.

“However, BirdWatch Ireland is concerned that this will not have the intended result and other measures need to be considered,” it said.

It said that in Northern Ireland, where burning is allowed up to April 14th, the extended season had not stopped fires from going out of control and causing significant environmental damage.

“In 2017 there were over 2200 out-of-control fires between January and May requiring the deployment of the fire service with over 500 of those after May 1st,” the organisation said.

BirdWatch Ireland said the changes in hedgecutting dates had been presented as a means of harmonising the Wildlife Act and the Roads Act for road safety purposes. But it said that not only were the sections unclear, but it took the view that the changes “will not solve the problem of compelling those who should cut potentially hazardous roadside hedgerows but don’t”.

Concerns for breeding birds from road side hedgecutting on roads with no obvious road safety hazard was “the number one complaint to BirdWatch Ireland from members of the public every year”.

“The passing of the Heritage Bill will signal a weakening of the laws protecting birds, bees and other animals which use our upland and hedgerow habitats at a time when they need all the help they can get,” the organisation said.

Oonagh Duggan, assistant head of policy and advocacy with BirdWatch Ireland, said the conservation status of Ireland’s biodiversity was not looking great when 91 per cent of our internationally-important habitats have ‘bad’ or ‘inadequate’ ecological status.

She noted the list of ‘birds of conservation concern’ in Ireland was “at its longest yet” and that a third of our 98 wild bee species were under threat of extinction.

Ms Duggan said BirdWatch Ireland had campaigned on the Heritage Bill for over thre years.

“Along with other national conservation organisations we succeeded in mobilising people around the country to voice their concerns about provisions in the Heritage Bill.

“Over 32,500 people signed a petition saying no to the Heritage Bill while BirdWatch Ireland members nationwide contacted their local and national representatives to make them aware of their concerns for birds and their habitats,” she added.

“We called for stakeholder forums to be set up to work out solutions to the issues that exist in our uplands and in relation to harmonisation of the Wildlife Act and Roads Act but to no avail. People need nature and a healthy environment and in Ireland nature needs the protection and support of government.”