Motorists to get better views by lowering of Clontarf wall 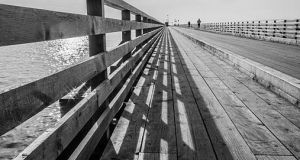 The wooden bridge to Bull Island at Clontarf, Dublin. The new wall was built as part of a €5m Clontarf cycle path which is due to be completed in April

Work is expected to begin this year to reduce the height of a newly-built Clontarf flood defence wall in Dublin which obscures motorists’ views of the sea.

The wall was built as part of the €5 million Clontarf cycle path which is due to be completed this month. Work on the 2km path began two years ago.

However, the council has decided to trim up to 30cm off the height of a section of the wall along almost half a kilometre opposite St Anne’s Park.

Following a long-running dispute with local residents and the commissioning of expert reports, the council in April last year agreed to reduce the height of the wall by 30cm. However, in a report to councillors on Monday, senior engineer Christopher Manzira said it would not be possible to reduce the height by 30cm for the entirety of the 470m section because this would make it so low in parts there would be a danger of walkers toppling over into the sea.

“In order to provide some protection against pedestrians falling into the lagoon it is proposed that the minimum height of wall should be knee-high,” he said. Knee height has been defined by the council as 50cm.

The council considered mounting a railing into the 180m section of wall that risked causing the trip hazard, but, Mr Manzira said it “concluded, in consultation with community representatives, that such alternatives would be less favourable as it is unlikely to enhance the visual amenity. Further, such alternatives would hinder the possibility of sitting on the wall.”

The wall does not obscure the views of Dublin Bay for pedestrians and cyclists using the new path, and the section being reduced is not opposite any houses. However, the council has said that if the wall was not lowered motorists would have restricted views of the sea.

class="no_name">Mr Manzira said cutting the wall height reduced the protection offered against tidal flooding. “The lowering of the wall by 300mm will mean that this portion of wall will only provide flood protection against a 100-year tidal event rather than the national standard of the 200-year tidal event.”

Work to reduce the wall is expected to take six to eight weeks to complete, but will not be undertaken until later this year following a public consultation process. However, if work is not completed by October it must be halted and restarted in April 2018 to accommodate the needs of migratory birds, particularly Brent geese.

The partial demolition of the wall had been expected to cost €500,000. However, Mr Manzira said the council hoped to be able to reduce this cost.

The demolition work will not be undertaken at weekends or during peak commuting times to lessen the impact on cyclists and walkers using the new path.

The cycle path, which runs along Dublin Bay from Fairview to Sutton, was put in place in the early 1990s but a gap was left between Causeway Road and the Wooden Bridge because no solution could be found to building on the environmentally-sensitive lagoon.

A plan, which was never implemented, was drawn up in 2008 involving a pile-supported promenade and cable-stay bridging out over the lagoon. It was to cost up to €14 million, or €7 million per kilometre. Instead, the €5 million path due to be completed this month involved reducing the width of the road to facilitate the cycle route.