What are these claw marks on our ash trees? Readers’ nature queries 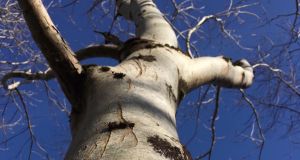 Eyes on nature: the badger scratches on one of Stan Williams’s ash trees; the animals exercise their tendons, strengthen their front claws, and mark their territory

There are what look like claw marks on young ash trees, first seen about 10 years ago, in our mixed broadleaf plantation. The marks appear low down and run as high as 4m up the trunk.
Stan Williams
Muff, Co Donegal

You have a resident badger clan in your plantation. These are badger scratch marks going back, as you say, 10 years. Those at the top are the oldest, because the tree has grown in the intervening years, and those near the bottom are more recent. Badgers stretch their full height to make the marks, to exercise their tendons, strengthen their front claws and mark their territory.

What’s the plant in my photograph, which I found growing in small clumps among the heather on a bog in Westmeath?
Mike Egan
Ballivor, Co Meath

It’s a lichen, ‘Cladonia portentosa’, or reindeer lichen, often found among the heather.

I found the insect in my photograph in my house. Could you tell me what it is?
Judith Fanning
Killiney, Co Dublin

It is the female giant wood wasp, a sawfly that bores into pine trees and lays eggs that take several years to develop. The “tail” is her ovipositor. Adults can leave the timber after it has been used in building.

On two evenings in March I had the pleasure of hearing and seeing flocks of geese flying northwest over my house. They make such a wonderful sound.
Geraldine Molloy
Achill, Co Mayo