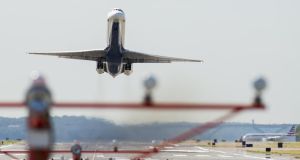 Greenhouse gases: Ireland books all emissions for the 15 aviation companies registered in the State, even if their aircraft never touch down in Ireland. Photograph: Saul Loeb/AFP/Getty

Greenhouse-gas emissions by Irish companies rose by 5.4 per cent in 2016, compared with a decline of almost 3 per cent across the European Union, according to the Environmental Protection Agency.

The aviation industry was responsible for the largest increase, with extra flights the main cause of a 23 per cent jump. The amount of carbon dioxide released by power companies climbed by 6.6 per cent, and cement-industry emissions increased by 6.8 per cent.

The drop across Europe was 2.7 per cent.

The figures are collated through the EU emissions-trading scheme, an international market that 100 big companies in Ireland take part in, buying and selling chunks of their EU-set emissions allowances. They can sell their surplus if they cut the amount of greenhouse gases that they release, or buy allowances from other, less polluting companies if need be.

The rules mean that Ireland books all emissions for the 15 aviation companies registered in the State, which include Norwegian Air International as well as Ryanair and Aer Lingus, even if their aircraft never touch down in Ireland.

Higher demand for electricity was responsible for the rise in power-generation emissions, which came from gas-fired plants; emissions from coal- and peat-fired stations dropped slightly. The Environmental Protection Agency said the amount of wind-powered energy available last year dropped.

The figures prompted Dr Tom Ryan of the agency to say that Ireland must break its dependence on fossil-energy infrastructure. Greenhouse-gas emissions from the trading sector have increased every year since 2013, he said, and 2016’s were the highest for eight years. He called the rise a “disappointing indictor that the price of carbon remains too low for the trading system to have the desired impact on emissions in Ireland”. A tonne of carbon-dioxide emissions currently costs €4.86.

Government policy is to cut carbon emissions “by at least 80 per cent compared to 1990 levels by 2050 across the electricity-generation, built-environment and transport sectors while achieving carbon neutrality in the agriculture and land-use sectors”, he said.

The 2016 results, which are an estimate by Thomson Reuters based on preliminary analysis of data from the EU, Norway, Iceland and Liechtenstein, have been sent to the Department of Transport and the Department of Communications, Climate Action and Environment.