New data shows that mass bleaching has occurred on Australia's Great Barrier Reef for the second year in a row, meaning two-thirds of the reef are now severely damaged. Pictures: ARC Centre of Excellence for Coral Reef Studies 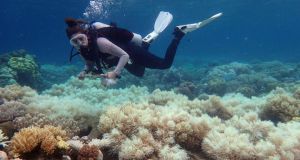 The findings have caused alarm among scientists, who say the proximity of the 2016 and 2017 bleaching events is unprecedented for the reef, and will give damaged coral little chance to recover.

Where last year’s bleaching was concentrated in the reef’s northern third, the 2017 event spread further south, and was most intense in the middle section of the Great Barrier Reef. This year’s mass bleaching, second in severity only to 2016, has occurred even in the absence of an El Niño event.

Mass bleaching – a phenomenon caused by global warming-induced rises to sea surface temperatures – has occurred on the reef four times in recorded history.

Prof Terry Hughes, who led the surveys, said the length of time coral needed to recover – about 10 years for fast-growing types – raised serious concerns about the increasing frequency of mass bleaching events.

“The significance of bleaching this year is that it’s back to back, so there’s been zero time for recovery,” Prof Hughes told the Guardian. “It’s too early yet to tell what the full death toll will be from this year’s bleaching, but clearly it will extend 500km south of last year’s bleaching.”

Last year, in the worst-affected areas to the reef’s north, roughly two-thirds of shallow-water corals were lost.

Prof Hughes has warned Australia now faces a closing window to save the reef by taking decisive action on climate change.

The 2017 bleaching is likely to be compounded by other stresses on the reef, including the destructive crown-of-thorns starfish and poor water quality. The category-four tropical cyclone Debbie came too late and too far south for its cooling effect to alleviate bleaching.

But Prof Hughes said its slow movement across the reef was likely to have caused destruction to coral along a path up to 100km wide. “It added to the woes of the bleaching. It came too late to stop the bleaching, and it came to the wrong place,” he said.

The University of Technology Sydney’s lead reef researcher, marine biologist David Suggett, said that to properly recover, affected reefs needed to be connected to those left untouched by bleaching.

He said Prof Hughes’s survey results showed such connectivity was in jeopardy. “It’s that connection ultimately that will drive the rate and extent of recovery,” Mr Suggett said. “So if bleaching events are moving around the [Great Barrier Reef] system on an annual basis, it does really undermine any potential resilience through connectivity between neighbouring reefs.”

Some reef scientists are now becoming despondent. Water quality expert Jon Brodie said the reef was now in a “terminal stage”. Mr Brodie has devoted much of his life to improving water quality on the reef, one of a suite of measures used to stop bleaching.

He said measures to improve water quality, which were a central tenet of the Australian government’s rescue effort, were failing.

“We’ve given up. It’s been my life managing water quality, we’ve failed,” Mr Brodie said. “Even though we’ve spent a lot of money, we’ve had no success.”

Mr Brodie said the compounding effect of back-to-back bleaching, Cyclone Debbie, and run-off from nearby catchments should not be understated.

“Last year was bad enough, this year is a disaster year,” Mr Brodie said. “The federal government is doing nothing really, and the current programmes, the water quality management is having very limited success. It’s unsuccessful.”

Others remain optimistic, out of necessity. Jon Day was a director of the Great Barrier Reef Marine Park Authority for 16 years until retiring in 2014.

Mr Day, whose expertise lies in protected area planning and management, said the federal government’s approach to protecting the reef was sorely lacking. He said it was taking too relaxed an approach to fishing, run-off and pollution from farming, and the dumping of maintenance dredge spoil.

“You’ve got to be optimistic, I think we have to be,” Mr Day said. “But every moment we waste, and every dollar we waste, isn’t helping the issue. We’ve been denying it for so long, and now we’re starting to accept it. But we’re spending insufficient amounts addressing the problem.”

The Queensland tourism industry raised questions about the reliability of the survey, saying scientists had previously made exaggerated claims about mortality rates and bleaching.

“There is no doubt that we have had a significant bleaching event off Cairns this time around,” said Col McKenzie, of the Association of Marine Park Tourism Operators.

“The far north probably did a little bit better, Port Douglas to Townsille has seen some significant bleaching,” he said. “Fortunately we haven’t seen much mortality at this time, and fortunately the temperatures have fallen.”

Mr McKenzie said more money needed to be invested in water quality measures, and criticised what he saw as a piecemeal and uncoordinated approach to water quality projects up and down the coast.