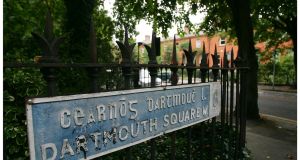 Dartmouth Square in Dublin. Residents say a new development has the potential to ruin the character and setting of the square and their homes

Leafy Victorian Dartmouth Square near Ranelagh, Dublin, once taken over by an Athlone tile salesman, is again under threat, according to residents, due to an office building redevelopment plan.

US investment company Hines plans to redevelop the former headquarters of the Irish Nationwide Building Society on Grand Parade, one of the few 20th century protected structures, refurbishing the existing eight-storey building and adding a new six-storey block.

The building backs on to Dartmouth Square, which came to prominence more than a decade ago when Co Westmeath businessman Noel O’Gara bought the freehold of the park at the centre of the square and tried to use it as a car park and tile showroom.

Following six years of legal battles, the park was sold at auction in 2012 by liquidators of one of Mr O’Gara’s companies Marble and Granite Tiles. It was bought jointly by the residents of the square and Dublin City Council for €142,000, with the residents ceding it to the council for use by the public.

Residents say the square, which is an architectural conservation area, is again at risk, with the new development having the potential to ruin the character and setting of the square and their homes, all of which are protected structures.

Almost 40 objections to the plans have been lodged with the council, several from groups of residents, which say the proposed six-storey extension to the 1960s building, originally the offices of the Carroll’s Tobacco Group, is over-scaled, would be visually obtrusive, and would rob the houses on the west side of the square of their daylight.

Residents said the new building would also ruin the view of the square from the park at its centre as it “loomed” over the Victorian houses.

Planning consultants MacCabe Durney Barnes, acting on behalf of 16 owners, said the development’s “scale bulk and massing bears no relationship with the unique character of the square”.

The submission said the proposed extension, which ranges from three to six storeys, “builds up in wedding cake-type fashion”, and the use of “bronze cladding and glazing” visually detracted from the original building.

This and several submissions noted that the “Carroll’s building” was a protected structure, and its setting should also be protected from inappropriate development.

The Irish Georgian Society and An Taisce also lodged objections to the scheme.

Hynes bought the Carroll’s/Nationwide building last year for about €37 million, more than €20 million more than in had sold for in 2013.

They would undertake a “sensitive upgrading and refurbishment” of the existing building, and the new building was designed to “not dominate the protected structure or adversely impact on Dartmouth Square”.