Can we keep the hen harrier dancing in Irish skies?

This majestic bird came back from near extinction before; we shouldn’t let it vanish now 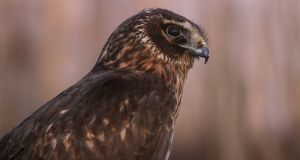 Hen harriers are actively persecuted by those who see the bird as a symbol of unpopular EU regulations. Photograph: De Agostini/Getty Images

Some birds can seem rather like unicorns: they appear to exist only as beautiful images in books.

As a child birder, I used to scan the colour plates of my bird guide, dreaming of seeing improbably beautiful and impossibly rare creatures like hoopoes, rollers and bee-eaters. As these birds hardly ever showed up in Ireland, they would remain locked between hardcovers for decades to come.

I also had a particular fascination with all birds of prey, but even the falcons and hawks portrayed in my book as relatively common to Ireland seemed to be disappearing from our landscapes, faster than I could grow up to find them.

Eagles, buzzards and kites were long gone, and the peregrine falcon seemed to be about to join them on our local extinction list. Happily it would eventually bounce back, after the banning of the pesticide DDT.

But there was one glimmer of good news in those raptor lean years: the hen harrier, a bird exceptionally elegant in plumage and spectacular in flight, was returning to long-abandoned breeding grounds.

The harrier is unusual among birds of prey in many ways, but most obviously because of the differences between male and female, differences so radical that they were long thought to be separate species.

The male is slim, streamlined and mainly silver-grey and white, except for wing tips that look as though they had been dipped in ink. The female is predominantly brown, bigger and heavier, a “bomber” to the male’s “fighter” to borrow an air force analogy.

Another distinctive feature of the harrier is its flight mode. It mostly flies very low when hunting, flickering wing-beats followed by short glides, beating and “quartering” systematically back and forth and across its territory in pursuit of small birds and rodents.

It is also unusual in that it uses its hearing at least as much as its sight to find prey. Indeed, children seeing a harrier close up often think it might be an owl: the striking discs around its eyes give a similarly delightful impression of human expressions to an owl’s “face”. The function of the discs, in both species, is to amplify sound.

The most distinctive aspect of the harrier, however, is what the American writer Frances Hamerstron described as “sky-dancing”, an aerobatic courtship display that may end in the male passing food to the female. BirdWatch Ireland has called it “one of the most magical natural spectacles in the Irish countryside”.

Eddie Balfour, a veteran observer from the Orkney Islands, has captured this performance well:

“The hen harrier . . . appears to abandon himself in mid-air, and hurtles earthwards, seemingly out of control, wings threshing, sometimes spiralling, until he seems destined to crash to the ground. He is, however, in perfect control for when near the ground he sweeps upward and ascends with vigorous strokes to regain height . . . he may execute a half-roll, or even turn a somersault, to fling himself into the next headlong dive.”

Rarer than the corncrake

I had never heard of sky-dancing when I first went in search of harriers, newly reported from Dublin’s Pine Forest, in the early 1960s. But I remember vividly the magic of seeing a single silvery male appear briefly over a distant horizon. In the years since then I’ve seen many harriers, but almost always on their coastal wintering grounds, and never seen the sky-dancing display, except on video.

Last month I decided to make a concerted effort to witness it in real life, while I still could. Sadly, recent surveys suggest that this iconic species is in trouble again in Ireland. It has now become a rarer breeding bird than the corncrake.

I headed for an SPA (an area specially designated for the harrier’s protection under the EU birds directive) in the hills where the boundaries of Cork, Limerick and Kerry run together. Forty pairs were nesting in this SPA in 2005, but only 25 by the last survey in 2015. Harriers have entirely disappear from some other areas already, so the threat of rapid population collapse is very real.

Regular nesting sites in this SPA now have to be closely guarded secrets. This is partly to avoid disturbance by over-eager twitchers – the first rule of responsible birding is to observe without being observed. But it’s also because active persecution continues, by those who see the bird as a symbol of sometimes unpopular, and often poorly communicated, EU regulations on farming in designated protection areas. It’s a sad pass when, instead of celebrating our natural heritage, we have to make aspects of it clandestine.

We visited two of the most promising sites for harriers, very productive in previous years, taking rigorous measures to conceal ourselves from any birds present, and from hostile human eyes. But after long hours of watching and waiting, we caught only two brief glimpses of a single male at one of the sites. There seemed to be no female present, and he did not dance.

This experience is of course not a scientific sample, but it fits the trend noted by many observers.

It is, however, still possible to see sky-dancing, without disturbing the bird, in an SPA where they are not persecuted. Take a pair of binoculars and drive through the Slieve Bloom mountains in Co Offaly, and you just may be able to see dancing harriers from the comfort of your car. Just remember not to hike anywhere near where they may be nesting.

Panel: Harrier conservation must benefit uplands farmers
Harriers are much more than spectacular birds: they are an indicator species that tells us whether the ecosystem they hunt over is healthy. Their renewed decline is one more of many signs that our uplands environments are collapsing, according to many experts.

Industrial forestry in its early growth phase may have assisted harrier recovery by providing sheltered nest sites. But mature forestry is a doubly problematic for these birds: it provides no habitat for their prey species, yet gives cover and refuge for foxes, stoats and pine martens, which prey on harrier eggs and chicks.

Despite this, forestry has expanded in the harrier SPAs since they were designated, and now occupies 54 per cent of these areas, though this expansion has been halted. Disturbance caused by the construction of windfarms is probably also a factor, as is uncontrolled burning and the removal of scrub to make farmland eligible for EU subsidies.

Farmers in designated areas often find themselves in an infuriating double-bind on these issues. Department of Agriculture inspectors can insist that they will receive no EU Single Farm Payment on scrubland not cleared for grazing or cultivation, no matter how poor the land is for these purposes. National Parks and Wildlife Service rangers can then tell them they will be penalised for clearing good harrier habitat.

Meanwhile, some farmers resent no longer being able to plant forestry, perhaps the one currently profitable use of their land, in designated areas. However, many hill farmers would much rather not see their landscapes smothered in conifers, as long as they were rewarded adequately for keeping habitat more open.

Joined-up thinking by policymakers is clearly required if the quality of our uplands habitats is to be improved. That thinking has to start with a focus on the well-being of the people who live there, who will ultimately decide the fate of these landscapes and the remarkable creatures that depend on them.

Otherwise, many of these creatures may soon indeed become as hard to find as unicorns.