At last, two snowy strangers find the lakes behind the shore 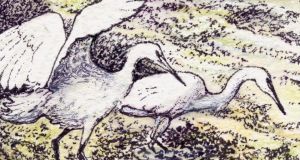 Even in our early years at Thallabawn, when so much in life was extraordinary, it seemed unlikely there were flamingoes on Corragaun Lough, behind the dunes. A summer visitor had taken his children boating there in a little rubber dinghy. “Daddy, what are those big, pink birds?” and he’d almost tipped over, twisting round to see.

Zooming down the hill on my bike and scattering the sheep, I hastened (the only word) across the duach. And yes, three flamingoes, bright as roses. Their pinkness made bright squiggles on the water as they dredged the sandy bottom for algae through bills held upside down, which is what flamingoes do.

The bigger, paler, greater flamingo, in dazzling flocks on the Camargue and some Spanish estuaries, does wander to these islands: I had seen one once while twitching (I was young) at a lagoon at Ballycotton, Co Cork.

But the bright coral pink on the necks of these birds marked them as Chilean, of the kind zoos delight in, and from whose ponds they can ascend if their wings aren’t clipped in time. In 2010, an 11-year-old flamingo took off from Dublin Zoo and landed in the Liffey at Islandbridge. It was recaptured by boat, to some applause.

Our trio didn’t stay, wherever they came from. But their visit to Corragaun marked out the lagoon, together with its twin lough, the deeper Carrigskeewaun, as obviously inviting to exotic droppers-in. Why should Cork get all the birding glamour – spoonbills, avocets, purple herons, little egrets – just because its coast is the first to loom up below wanderers on the wing?

We do, of course, get the whooper swans from Iceland in winter, ice-white, beautiful and musical as they dip for waterweed beneath Carrigskeewaun’s cliff. Ornithologist David Cabot, whose home and nature reserve is here, counted 41 swans this winter, something of a record. And since then, in just a glimpse, a pair of little egrets, flying together between the lakes: the first to explore this wetland sanctuary below Mweelrea Mountain.

It’s 20 years exactly since Egretta garzetta began breeding in Ireland, two pairs seen adding nests to a heronry (of our native birds) in a woodland on the Blackwater in Co Cork. Since then they have colonised Ireland, wading in estuaries, marshes and coastal lagoons in almost every county and delighting thousands at their first encounters.

Their dramatic expansion from southern Europe has paced the milder winters of climate change. Long used to seeking winter warmth in north Africa, they began to stay in Europe in the 1950s. Then, with numbers growing in France and Spain, they dispersed northwards along the Atlantic coasts, breeding in Brittany, Normandy and then across the channel in English estuaries. The first chicks appeared there in 1996, a year ahead of those in Cork.

By 2009, when nesting egrets were discovered in a heronry in Galway Bay, Chris Benson and John Lusby of BirdWatch Ireland began colour-ringing the chicks – 77 of them so far. Some of the ringed birds have been spotted in Dublin Bay and beyond, but the furthest, somewhat amazing record has been of a Galway nestling ringed in June, 2013 that was photographed in Iceland, some 1,200km away, in October.

It would be good to have egrets nesting in the old, wind-stunted oaks above the lake, where even the resident herons haven’t built (they fly across the bay from Connemara). No longer up to scrambling to the clifftop, I look forward to a peep through David’s telescope.

At home, meanwhile, another coloniser of Ireland has me at close quarters – the collared dove, Streptopelia decaocto (which sounds like something one would rather not catch). After weeks of cu-cu-cooing from a clump of conifers down the road, three of them arrived together the other morning, fluttering down past the kitchen window in a whirr of coffee-coloured organdie.

Two of them later rushed off in a chase, so perhaps they have their eye again on the dense tufts of a Leyland cypress we should have left behind in Dublin. After 50 years or so, the suburban screens of Leylandii have helped the dove to reach the top 20 among Ireland’s common garden birds.

It is also the frequent source of false cuckoo reports, despite the distinct, declarative call – cuck-oo – of the real bird. This makes it hard for Dr Damian McFerran of the Ulster Museum to trust the absolute veracity of records he shares with the Republic’s biodiversity data centre in Waterford. (Submit them online at iti.ms/2oaDPvs.)

Britain’s cuckoos have halved in 20 years. In Ireland the plentiful meadow pipit nests in regions such as the Burren and Connemara may nourish enough cuckoo changelings to have put off any serious decline.

The bird’s migration routes to and from the UK are being tracked by satellite and flight paths from Africa are mapped at iti.ms/2nj8BhN.