Weekend weather off to good start with widespread sunshine

Highs of 13 degrees recorded, with temperatures of 15 degrees expected over weekend 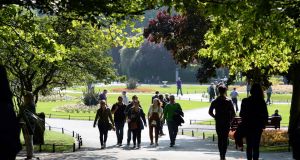 Temperatures of 13 degrees have been recorded across the country on Saturday, with highs of up to 15 degrees expected over the weekend.

Met Éireann has said there will be “good sunshine for most parts of the country” this afternoon with temperatures reaching “15 to 19 degrees in light to moderate southeasterly breezes”.

The west and centre of the country will see the best of the sunshine with temperatures in the high teens when the sun breaks through the cloud.

Fog and haze will keep the temperatures down in the south and south-east.

Today will not, though, be the warmest day of the year to date. A high of 19.2 degrees was reported in Newport, Co Mayo on March 25th, the highest March temperature for five years.

Unfortunately, the warm spell will be short-lived with cooler conditions spreading across the country on Sunday.

It will be mostly cloudy with outbreaks of rain spreading eastwards across the northern half of the country during the morning and afternoon on Sunday.

The southeast will have the best of the temperatures on Sunday with highs of 15 degrees.

“Early next week looks like there will be a reasonable amount of dry and cool weather,” said Met Éireann forecaster Pat Clarke. “There will be showers around from time to time, mainly in Connacht and Ulster. It’s reasonable enough for the time of year. It is only April still.”

The big event of the weekend is the National Football League final at Croke Park between Dublin and Kerry.

Some 2,000 participants on Sunday are expected to take part in the Glendalough Quest which involves racers running and cycling through the Wicklow Mountains National Park and Glendalough Valley. The gruelling challenge is completed with a kayak race on the Upper Lake.