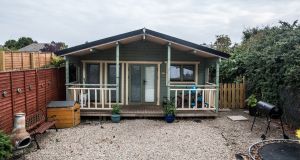 A log cabin in a garden in Dublin. Photograph: James Forde

Erecting log cabins or “sheds” in back gardens will not solve the housing crisis and will set a “dangerous precedent”, the Irish Planning Institute (IPI) has warned.

People Before Profit councillor John Lyons wants a change to the Dublin City Development Plan to allow families to provide accommodation for relatives in cabins at the back of their houses.

The council’s planning department said on Tuesday it will examine the proposal and produce a report earlier next year.

However, IPI president Joe Corr said the housing shortage was not a reason to “abandon good thinking” in planning.

“Despite our intense desire as a community to overcome the current chronic housing shortage, we cannot just set aside common sense in deciding what type of housing is allowed and where it is located,” he said.

“We do need to be innovative but instead of engaging in knee-jerk reactions and blaming ‘planning’ and plan making, our regulatory framework needs continued strengthening to deliver sustainable solutions.”

Planners regularly argued for increased density of residential dwellings in urban areas he said, but the creation of one-off dwellings in unplanned spaces was “not a constructive or sustainable approach to density” and “threatens a dangerous precedent” at a number of levels, he said.

This included the risk to health and fire safety where one-off dwellings on an “ad hoc basis” had no independent access to infrastructure or utilities such as sewage and gas. There were also concerns about the effect on the community, with neighbours potentially losing privacy, suffering noise disturbance, and the loss of mature vegetation or landscape screening.

The durability of modular type structures as residential dwellings was also a concern, he said.

“Everything we do has to be sustainable. One off temporary dwellings, ad hoc backland infill and shed/log cabin dwellings in back gardens are not the answer to the housing shortage,” he said.

“Aside also from the impact on individual communities, the precedent they create would create an opportunity for the unscrupulous to flood the market with inappropriate rental properties that would deepen the market challenge.”

City planner John O’Hara on Tuesday told councillors that while he understood the reasons for Mr Lyons’s proposal, there was a considerable risk in allowing the use of cabins.

“There is a real concern that such a proposal may result in substandard accommodation particularly if there are unscrupulous landlords involved,” he said. “You can imagine the situation; it doesn’t have to be one ancillary accommodation at the back garden, it becomes two or three.”

Mr O’Hara also had “grave concerns” about the council’s ability to enforce rules in relation to ensuring a “cabin at the back of someone’s house” was being used by a family member and not for profit.

Mr Lyons’s proposal follows the refusal by An Bord Pleanála of the retention of a wooden structure, described as a log cabin, as a dwelling in the rear garden of a semi-detached house in the north Dublin suburb of Raheny.