Governments must be more ambitious on climate change 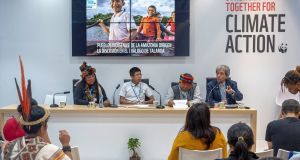 The message from UN climate talks in Katowice, Poland, this week was stark, so much so that governments had to be more ambitious in responding to climate change, Minister for Climate Action and Environment Richard Bruton has said.

While there was a narrow time-frame for actions to be successful and the consequences of failure were appalling, by and large the technologies needed to address climate issues were available, he told the Climate Action Committee on Wednesday.

Achieving economy-wide emissions reductions at scale was now required in every sector, especially in transport and agriculture. “This will be a huge challenge which all countries will face over the coming decades,” he added.

Ireland’s National Mitigation Plan (NMP) was an initial step. “By its own admission it did not set out the full suite of policies and measures necessary to achieve our 2020 or 2030 targets.”

Beyond 2030, a target of “zero carbon by 2050” was being proposed in Katowice, which he favoured for Ireland – currently, there is a national target of 80 per cent decarbonisation by mid century.

The first draft of the National Energy and Climate Plan (NECP) would be submitted to Europe by the end of December. “By the time we come to submit the final NECP of next year, it will set out clearly how we will meet our emissions targets for 2021-2030 and what contribution we will make to the overall EU level targets on renewable energy and energy efficiency.”

An all of Government plan to bring about a step change in climate ambition over the next decade, and beyond, would be published at the end of February, he confirmed.

“My vision is that this new plan will set out the actions which must be taken in every Government department and body to make Ireland a leader in responding to climate change. It will have a strong focus on implementation, including actions with timelines and steps needed to achieve each action, assigning clear lines of responsibility for delivery.”

It would be informed by successful approaches in other countries, where such approaches could be adapted for implementation in Ireland, and built on the previous actions taken by Government, including in the NMP and the National Development Plan (NDP).

He had identified supplementary actions needed, such as looking at the regulatory framework; the adoption of known technologies and “addressing market failure” by way of a carbon tax which imposed a cost on those responsible for pollution behaviour though he accepted it should be revenue neutral.

In response to Sinn Féin TD Brian Stanley, Mr Bruton accepted there was a pressing need to consolidate legislation to facilitate offshore wind projects but pointed to a long-standing problem in relation to foreshore legislation.

Independent TD Thomas Pringle said recent submissions to the committee from various department officials suggested its work in reporting on what should be in the NECP did not matter and was a nuisance, distracting from their core work.

Working across government was not easy, Mr Bruton replied, but critically in this instance he had received a mandate from the Taoiseach and the Government.

Green Party Senator Grace O’Sullivan said Moneypoint power station should be closed. It had not been operating for the past two months “and “hardly anybody noticed”. It would send the right signal, while renewable energy could make up the shortfall.

Mr Bruton said the station acted as an important reserve though it may be last to feed into the national grid. Greater interconnection options need so Ireland could avail of other power sources. Its closure needed to planned – “you just don’t switch it off and close the door” – because in the short-term other fossil fuels would have to be used to maintain electricity supplies.