Dublin City Council seeks €400,000 to set up taskforce to crack down on Airbnbs 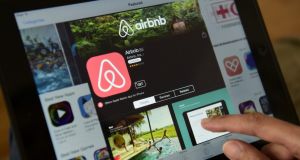 Minister for Housing Eoghan Murphy last month announced plans to tighten the rules around the use of properties for short-term lets in areas of high housing demand. File photograph: Getty Images

A dedicated team to police potentially illegal Airbnb-style rentals in Dublin is to be formed by Dublin City Council in response to the upcoming regulation of the short-term lets.

The council is seeking €400,000 from the Department of Housing and Planning to set up a new enforcement regime to deal with what it says will be the “logistically very difficult” area of holiday-let regulation.

Minister for Housing Eoghan Murphy last month announced plans to tighten the rules around the use of properties for short-term lets, such as Airbnb, in areas of high housing demand.

Mr Murphy is proposing that owners of buy-to-let properties will have to get planning permission to run short-term lets for more than three months every year. Owner-occupiers are not expected to face restrictions in letting individual rooms in their houses for short-term stays but will only be able to let their entire homes for three months in a year.

The head of the city council’s planning department Richard Shakespeare said the “form or content” of the regulations was “not known exactly” and it was “not fully clear” how house-shares were to be dealt with, but with a potential 5,000 short-term lets in the city, enforcement was expected to be onerous.

“The enforcement of short-term lettings is logistically very difficult, with problems establishing ownership, gaining access to apartments/houses and most importantly a requirement to prove illegal occupation.”

Mr Shakespeare said he envisaged difficulties with “hearsay evidence regarding proof of use” as short-term guests using a property at the time of inspections “will be gone and will not be in a position to give evidence on our behalf” he said.

“This fact alone will require planning enforcement officers to go out in pairs in many cases to make their evidence admissible in court if the need arises.”

The production of internet listings of properties from short-term letting platforms would not be sufficient evidence to allow the council to issue an enforcement notice against the property owner or sustain a conviction in court, he said.

“The onus will be on the local authority to provide first-hand evidence of occupation of properties for short-term/holiday letting purposes. The owner of the property will then have to be traced and served with appropriate notices/legal proceedings as appropriate,” he said.

“As we could be dealing with in excess of 5,000 properties it will in all likelihood be resource intensive.”

Mr Shakespeare said he intended to seek in the region of €400,000 from the department as an “initial cost” to establish a new regime to enforce the regulations.

A spokesman for the Department of Housing said it would be engaging with the council with regard to their “needs for enforcement” and noted that the funding requirement set out by Mr Shakespeare was “an initial estimate only”.