Application for 300-bed development seeks use of council land 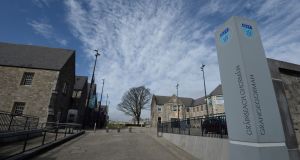 More than 20,000 full- and part-time students are due to attend DIT’s consolidated campus in Grangegorman, Dublin 7, by 2020. File photograph: Dara Mac Donaill

Plans for a seven-storey apartment complex for almost 300 students beside the new DIT campus at Grangegorman could be blocked by Dublin city councillors.

Investment fund NTM Capital wants to redevelop the former Nolan Seafoods factory on Rathdown Road as a 289-bed complex, and create a link to a 444-bed student development which is already under construction on the North Circular Road.

The application has been made directly to An Bord Pleanála under the new “fast-track” planning process for large housing developments. Under the Strategic Housing Development system, applications for schemes of more than 100 homes, or blocks of 200 student bed spaces, are made directly to An Bord Pleanála, bypassing the local authority decision phase.

However, while the council does not have decision-making powers over the application, it does own some of the lands NTM wants to use for the scheme. The council lands incorporate an access lane from the proposed development on to Rathdown Road/Grangegorman Lower, directly opposite the entrance to the DIT campus, and cannot be used without the permission of councillors.

Councillors will be asked to agree to the sale of the land, but only if the development is granted permission by the board.

Local councillors have raised concerns about the concentration of student accommodation in the area since DIT began moving students to Grangegorman in the last two years.

More than 20,000 full- and part-time students are due to attend the college’s consolidated campus on the site of the former St Brendan’s Hospital by 2020.

“We don’t yet know what the outcome of this experiment will be, but we are right to be concerned about the placing of many hundreds if not thousands of students in a concentrated area,” he said.

Mr Cuffe added that the promised easing of the local rental market with students switching to purpose-built blocks had yet to materialise.

Workers Party councillor Éilis Ryan said the new blocks were unaffordable for students, who would be unlikely to leave cheaper local accommodation.

Sinn Féin councillor Janice Boylan said there was an “over-concentration” of student accommodation in the area, while Cllr Christy Burke said there was a growing anxiety among older residents about the impact on their community.

Fine Gael councillor Ray McAdam said the full city council had already stated its concern about the over-concentration of “any one type of accommodation” in an area, and said he feared “a gun will be held to our head in terms of disposal” of the council land.

The board is expected to issue its decision by the new year.