Nationwide ban on use of smoky coal to begin in September 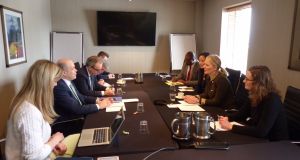 Minister for Communication, Climate Action and Environment Denis Naughten pictured at a meeting with his Canadian counterpart Catherine McKenna in Toronto when he confirmed Ireland is to join the ‘Powering Past Coal’ alliance.

Ireland is to join an international alliance committed to accelerating the end of coal use for power generation and for other forms of energy. Minister for Communications, Climate Action and Environment Denis Naughten confirmed the move after a meeting with his Canadian counterpart in Toronto.

The move means a nationwide ban on use of smoky coal will come into force in September, Mr Naughten said, but, more significantly, use of coal at the ESB Moneypoint generation station will be ended by 2025. It follows a Cabinet decision taken last week.

The Moneypoint move was flagged in National Development Plan 2018-2027. Countries joining the alliance also commit to developing cleaner technologies especially in the context of climate change. Coal-fired plants currently generate 40 per cent of the world’s electricity, and are a leading source of carbon emissions.

The “Powering Past Coal” alliance of states, regions and businesses was announced at the UN climate talks in Bonn during November in an initiative led by Canada and the UK, who since then contacted the Government about joining.

Canadian minister of environment and climate change Catherine McKenna welcomed Ireland’s move. “It’s simply the right thing to do to ensure a better future for our children and grandchildren, and we applaud Ireland in joining the Powering Past Coal Alliance.”

The alliance was “a great example of how you can build healthier communities . . . and grow clean economies”, she added – Ireland was the 27th country to join.

In December 2015, the then-government committed to identifying “the most suitable replacement low-carbon generation technology” at Moneypoint “before it comes to the end of its operating life in its current configuration in 2025”.

The ESB has been reducing coal consumption at the facility in Co Clare since 2012 but has yet to announce an alternative energy source. It is expected this will probably be natural gas, which is cleaner than coal though it’s a fossil fuel.

Moneypoint is Ireland’s only remaining coal-fired powered station, importing and burning around two million tonnes of coal a year from as far afield as Colombia. It remains one of Ireland’s largest power stations with an output of over 900 megawatts, accounting for a fifth of Ireland’s electricity needs.