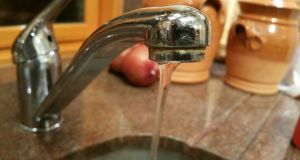 Water restrictions in the Dublin area will continue for the foreseeable future, Irish Water has said.

Eamon Gallen, general manager of Irish Water said while restrictions in Dublin will be reduced for the next two weekends, they will be re-introduced and remain in place for “some time to come”. He said problems will persist in some areas until April and May.

Demand on the Dublin network, which serves 1.2 million people, has been 590 million litres per day recently.

Mr Gallen said reservoirs in Dublin are 70 million litres lower than they need to be, despite “a huge amount of leaks” being repaired.

He told RTÉ’s Morning Ireland on Friday the utility will be concentrating on ensuring full service for areas around Croke Park, the Three Arena and the Aviva stadium, all of which are hosting major events this weekend.

A full service is also expected in Dublin next weekend for St Patrick’s Day festivities.

He said a combination of storm damage, leaks and an algae problem in the Vartry reservoir have all contributed to the restricted supply in Dublin.

Outside of Dublin, there are 12,750 people without water, with some 12,000 of those in south Tipperary, where a water treatment plant was contaminated with kerosene. The Fethard public water supply is due to be back up and running on March 19th.

Mr Gallen said a further 35,000 people whose supply is currently restricted will have full service restored by the end of next week while all boil notices have been lifted.

In Dublin, the condition of leaking pipes, which are on average 80 years old, together with increased demand, has forced authorities to reduce pressure overnight for the last four nights to allow reservoirs refill.

There were 22 local authority and contract specialised detection crews out across the greater Dublin area in recent days and 26 repair crews “prioritising the most significant bursts and leaks”.

Irish Water said those on the edges of the network or on high ground were most affected by water supplies being curtailed.

The utility said a “sustained programme of work” was required on its network over the next weeks and months to restore pre-Emma levels in reservoirs “which were themselves too high and which we were working to reduce”.