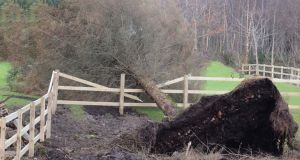 Storm Lorenzo originated in the Caribbean, wreaking havoc as it crossed the the Atlantic, but experts have noticed something strange about Irish storms over the past 10 years – far more of them are coming from the east.

“This is a new phenomenon and it is very definitely as a result of climate change,” says Seámus O’Brien, head gardener at the National Botanic Gardens and one of the country’s foremost plant experts.

The big problem is that the direction of growth of Irish trees leaves them vulnerable to easterly winds. The prevailing winds in Ireland come from the southwest and trees “anchor” themselves into the ground to cope with gusts from the most prevalent direction.

“A tree’s natural engineering in Ireland is for south-westerlies, so suddenly when you have a storm that hits them from the opposite direction they are not ready for it,” says O’Brien.

At the National Botanic Gardens’ estate in Kilmacurragh, half an hour south of Bray, Co Wicklow, O’Brien and his team have planted more than two miles of deep hedgerow on the eastern boundary alone to deal with this new threat facing their prized arboreal collection.

O’Brien says the whole country needs to look at taking similar measures. Farmers, landowners and country-dwellers have a particular responsibility, he says, but State-level action is what is really needed.

Storms such as Lorenzo are fast becoming the new normal and trees are being threatened with destruction from them, especially when they occur outside of winter when deciduous trees are in still in leaf.

“It is not like dealing with a winter storm when trees are out of leaf, when it is much easier for the wind to funnel its way through a tree collection.”

Oaks, with their heavy canopies, are among the more vulnerable specimens.

“The canopy of leaves is like giving the tree a sail, so the storm has a huge grip on them,” says O’Brien.

Another issue is increasingly wet conditions from climate change, which leaves the ground saturated, further increasing the risk of trees being uprooted. Drainage systems are vital to combating this.

O’Brien says recent storms inflicted “tremendous damage” on Killarney National Park in Co Kerry, where there was a “massive loss of trees”.

“The oldest tree we have in Kilmacurragh is a yew dating back to the Tudor period,” he says.

“It has been absorbing CO2 since that time. If you multiply that by the sheer numbers of trees that came down at Killarney alone, that is a lot of carbon no longer being extracted. There is the impact on wildlife habitat and the visual effects, but it is really about the carbon sink that we are losing,” says O’Brien.

One of the major problems is the type of trees being planted in Ireland. People need to “rethink” the country’s habit of putting the likes of spruce and leylandii in the ground and turn back to native species with a mix of both evergreen and deciduous, says O’Brien.

Such a mix creates “shelter belts” which allow storms to filter through and gradually break down rather than a dense barrier, as is the case with the likes of fast-growing leylandii.

“With barriers, the wind goes up it and comes down the other side with much more force,” says O’Brien.

“So what you’ve done is made the effects of the wind even more dangerous again.”

O’Brien also takes issue with recently announced Government plans to encourage the planting of 22 million trees every year over the next two decades as part of its climate change strategy. The target is for 70 per cent conifers and 30 per cent broad leaves.

O’Brien says its not enough and the Government needs to flip its ratio back to front, so that two-thirds of new planting should be broad leaves.

“To cover the air miles we fly alone, it is said everybody on the planet would need to plant 1,300 trees per year. Twenty-two million trees sounds like a lot, but its not that many – not on a national scale,” he says.

“It is also dangerous that we are relying far too much on just a handful of species. Ireland should know better than this given our history of a monoculture of potato growing 160 years ago and the devastating consequences of that,” says O’Brien.

“Every second tree in Ireland planted now is Sitka spruce, which leaves us wide open, that if one particular pest hits that tree, we are done for.”