Digging below the surface of our 58 habitats, it’s clear some are thriving better than others 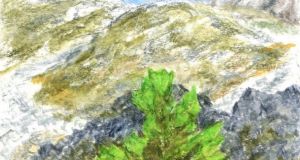 Rare moss at the Allihies mine in west Cork. Illustration: Michael Viney

A “habitat” is where particular plants and animals live and reproduce most successfully. Its size and character depend on the local soil and its moisture, on climate, food supply, level of predators and so on.

Sorting the landscape into its habitats was basic to conserving what was left of Europe’s natural world – the ideal of a vastly detailed enterprise by the European Union. Scientists from all the member countries, at endless meetings with the European Commission, decided the priorities of the Habitats Directives. By 2007, the list of habitats had gone through three versions, adding new ones as the EU was enlarged.

The accession of Bulgaria and Romania, for example, added the “Panonian” region to the Continental, Mediterranean, Alpine, Atlantic, Macaronesian and Boreal regions, plus novelties such as “Moesian silver lime woods”, “Iberian gypsum steppes” and “Baltic esker islands”.

One that has repeatedly caught my eye, however, is “Calaminarian grassland”. What on earth could this be?

It has now arrived on my desk as a glossy fistful of some 270 pages: the latest monitoring survey of the habitat for the National Parks and Wildlife Service (online as Irish Wildlife Manual 105). It has abundant photographs of its local landscapes, a good many of which, even on a sunny day, are bleak and uninviting.

These are, indeed, wastelands – the tracks and spoil heaps of mines. Their marginality encourages the dumping of builders’ rubble and the furrowing of the ground by weekend bikers and errant 4 x 4s.

Nature, however, will always grow something, even on such toxic “metalliferous substrates”. The adapted vegetation includes sheep’s fescue grass and even common coastal wildflowers such as bladder campion and thrift. But the scientific focus is on mosses and liverworts so rare as to warrant European conservation.

“Calaminarian grassland” is actually named after a yellow-blossomed wildflower of continental Europe, Viola calaminaria, which in turn was named after the zinc ore calamine. Neither Britain nor Ireland grow this viola among the limited flowering plants of spoil heaps, though zinc is plentiful enough on both islands, along with lead, chromium, cobalt and copper.

Most of the 29 sites in the survey (by bryophyte consultants Rory Hodd and Nick Hodgetts) are in Wicklow and Cork and have the poor range of species typical of many old mine sites in Cornwall. The leading showpiece of Ireland’s mining heritage, however, is at Allihies in west Cork, which also happens to harbour the scarcest of the mosses, found in small cushions in 2006 and legally protected in 2015.

Mining for copper began at Allihies in 1812 and later warranted a towering engine house, of Cornish design, that still stands sentinel on the mountainside. Here too, among the slopes of vegetated spoil, are patches of Ditrichum cornubicum, a moss only known at two other sites in Cornwall. Its supposedly “common” name of “Cornish path moss” fits oddly with its place in the International Union for Conservation of Nature red list of the most threatened species in the world.

The continuing decline of Ireland’s Calaminarian sites, detailed in the latest survey, is inevitable and due simply to the passage of time. The toxicity of the spoil heaps decreases with exposure, so that plant succession over the years brings changes to other sorts of habitat such as gorse scrub, heath and acid grassland. Several of the sites are already dwindling as the surrounding grassland edges in.

Of the 29 sites so laboriously surveyed, only nine were assessed as in “favourable” condition. The Allihies hillside, with its fenced-off open mine shafts, is one of them. But the few plants of the phenomenally rare Ditrichum cornubicum are still candidates for suggested conservation measures.

Along with stopping the dumping of rubble, the report’s proposal is to scrape back the surface of the soil to expose new metalliferous ground on which the moss could spread.

A recent study by UK bryologist Des Callaghan describes a trial at the moss’s habitat at the Phoenix United Mine in Cornwall. “Turf stripping of trial habitat management plots,” he reports, “using a mechanical excavator [and] re-exposing bare metalliferous ground, is shown to be remarkably successful, providing a 20-fold increase in the population, presently making it the most important site for the plant in the world.”

At Allihies, access to this minute moss will probably be limited to admiring its photograph in the visitor centre. Out on the hillside, this proof of plant adaptation to an extreme environment will become, like the mine, a museum piece, painstakingly preserved.