Two new studies by Irish scientists have established a shellfish “fingerprint”, tracing the food from sea to plate with pinpoint accuracy. Irish shellfish could become the first of its kind to carry a guarantee of 100% traceability. Video: Chris Maddaloni 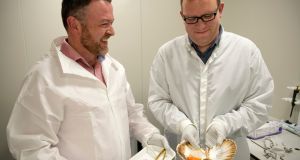 Dr Conor Graham of the Marine and Freshwater Research Centre at the Galway Mayo Institute of Technology, and Dr Liam Morrison, at the Ryan Institute, NUI Galway, explaining their research. Photograph: Chris Maddaloni

Two new studies by Irish environmental scientists have established a shellfish “fingerprint”, tracing the food from sea to plate with pinpoint accuracy .

It is envisaged that the breakthrough could help speed up recalls in the case of outbreaks of food poisoning.

However, the main potential advantage is that Irish produce could become the first of its kind to carry a guarantee of 100 per cent forensic traceability, a development that might enhance its reputation and even increase its value.

Successfully trialled in both mussels and scallops, it is likely to work too with razor clams and oysters. The method could also be tested on crustaceans, the family that includes prawns, lobsters and crabs.

The research was led by Dr Conor Graham of the Galway-Mayo Institute of Technology Marine and Freshwater Research Centre, together with Dr Liam Morrison of the Earth and Ocean Sciences Ryan Institute at NUI Galway.

The results, published in the international journal Science of the Total Environment, traced the harvest location of blue mussels and scallops with 100 per cent accuracy and distinguished between scallops harvested just six weeks apart at the same site.

Not only could it greatly improve traceability in cases of food poisoning, but the researchers believe it could be a major PR coup for a sector already renowned for its quality.

“There is very low risk to eating shellfish but it is [beneficial] for consumer safety and health. It should also be used for marketing; people are more conscious of the origin of their food,” said Dr Graham.

Chinese demand drove prices up for some types of shellfish last year, although the value of farmed produce fell 6 per cent to €56 million.

According to BIM, Ireland’s Seafood Development Agency, shellfish processors bucked a broader trend of decline in the fish sector with growth of 14 per cent – more than doubling in the past 10 years.

“A lot of people are still afraid of shellfish,” said Declan MacManus (33), executive chef at the King Sitric, the recently crowned Irish Seafood Restaurant of the Year in the north Dublin fishing village of Howth. Mr MacManus likes the idea of a traceability system that is impossible to get around but, more importantly, sees its value for consumers.

“The confidence that [system] would give a nervous customer – maybe in five years we could see that stigma of shellfish start to disappear,” he said. “Anything that brings the consumer closer to the producer, that’s the way food has gone in the last five to 10 years.”

The Food Safety Authority of Ireland runs a shellfish harvesting monitoring programme to ensure potentially harmful biotoxins do not make it to market.

Supervised by the Sea Fisheries Protection Authority and the Marine Institute, the system has samples of farmed and wild shellfish collected from coastal production areas and tested – particularly clams, mussels, oysters, razor clams and scallops.

Simon Kennedy of Killary Fjord Shellfish in Co Galway is optimistic about what the science could mean for traceability but is not easily won over on the potential for added brand value, having once dabbled unsuccessfully with a quality assurance system that demanded more time than it was worth.

However, he notes some restaurants can stock up to 10 different types of oyster, so if someone gets sick it would be very useful to have such a focused system to identify the culprit, particularly for recalls and potential legal actions.

“If a recall is done, they are all in trouble,” he said of producers in the current system. “I suppose that is the reason why this would be of benefit to the industry.”