More than a fifth of snails, mosses, liverworts and hornworts are under threat 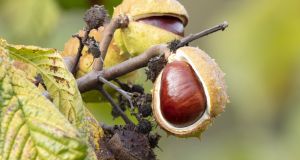 Horse chestnuts have been assessed as ‘vulnerable’ to extinction in Europe. Photograph: iStock

Horse chestnut trees, whose conkers have been collected and treasured by generations of children, are among scores of European trees at risk of extinction.

The latest assessment from the International Union for Conservation of Nature (IUCN) Red List also reveals three species of whitebeam recently discovered in Somerset are critically endangered at a European level.

The European Red List of trees, which covers all 454 species of native trees, found more than two-fifths — 168 species — are under threat of dying out in Europe.

More than half (58 per cent) of the trees that are endemic — which are only found in Europe — are under threat, the assessment shows.

Craig Hilton-Taylor, head of the IUCN Red List Unit, said: “It is alarming that over half of Europe’s endemic tree species are now threatened with extinction.

“Trees are essential for life on earth, and European trees in all their diversity are a source of food and shelter for countless animal species such as birds and squirrels, and play a key economic role.

“From the EU to regional assemblies and the conservation community, we all need to work together to ensure their survival.”

Horse chestnuts have been assessed as “vulnerable” to extinction in Europe, the highest level of threat after critically endangered and endangered, following declines caused by the leaf-miner moth.

The moth is an invasive species whose caterpillars feed inside and damage the tree leaves and which originated in isolated mountains of the Balkans before spreading throughout Europe.

Though horse chestnuts are widespread across Europe, they are naturally only native to Bulgaria, Greece, Albania and the Republic of North Macedonia.

National assessments have found the species is endangered in Bulgaria and Greece and critically endangered in Albania, with the leaf-miner moth adding to pressures from logging, forest fires and tourism.

In the UK, three whitebeams only discovered 10 years ago in Cheddar Gorge in Somerset — the Cheddar whitebeam, Twin cliffs whitebeam and Gough’s Rock whitebeam — have all been assessed as critically endangered.

They are part of the “Sorbus” genus which is particularly at risk, with three-quarters of European species under threat, the study shows.

The tree assessments are part of a drive to examine the fortunes of overlooked species for the European Red List.

Analysis found more than a fifth of land molluscs, such as snails, and bryophytes — plants such as mosses, liverworts and hornworts — are under threat.

So too are almost half of shrubs, the new assessments found, warning the primary threats to overlooked species are loss and destruction of Europe’s wild areas, agriculture, invasive species, and climate change.–PA