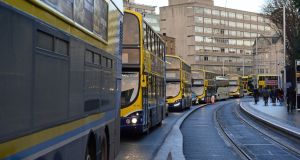 Parts of Dublin city centre are likely to breach EU and World Health Organisation guidelines for air quality in 2019, according to the Environmental Protection Agency.

It also found the worst air pollution in 2018 was recorded at an EPA monitoring station near Heuston Station, at St John’s Road West, “due largely to our reliance on fossil-fuelled motor vehicles for transport” .

Launching the Air Quality in Ireland Report 2018 to coincided with International Lung Day on Wednesday, the EPA said an estimated 1,800 people died prematurely every year in the Republic as a result of poor air quality.

The report found that although the State’s overall air quality for 2018 met the legal requirements of EU standards, it fell short of the tighter World Health Organisation guidelines.

And in a commentary on the 2018 report and prediction for the overall 2019 results, the EPA said “in urban areas, transport-related emissions of nitrogen dioxide are increasing, and it looks probable that Ireland will exceed the EU annual legal limit value for nitrogen dioxide in the near future”.

The Air Quality in Ireland Report 2018 is the latest in a series of EPA reports to raise concern about air quality, particularly in Dublin.

In July the organisation said many areas of Dublin were affected by nitrogen dioxide, with indications that frequent breaches of EU limits were occurring due to large volumes of traffic.

High levels of nitrogen dioxides are notable for their contribution to respiratory illness and asthma, with children and older people most vulnerable. The July report attributed the risk to “reliance on fossil-fuelled motor vehicles for transport”.

The EPA said the worst areas in the capital were along the quays; at the entrance to and exit from the Dublin Tunnel, along the M50, on Pearse Street and in the vicinity of Heuston station.

In relation to pollution from domestic fires he said levels of particulate matter – fine particles – in air was a “growing concern”.

“Levels of this pollutant are particularly high during the winter months, when people’s use of solid fuels such as coal, peat and wood impacts negatively on air quality, especially in small towns and villages,” the EPA report said.

It compared two towns – Bray in Co Wicklow and Longford in Co Longford – finding that Longford had more polluted air, at least in part because of the lack of a ban on smoky fuels.

Mr Kenny noted that any changes to more air-friendly home heating and solid fuel products would have a subsequent improvement on air quality.

In urban areas, it said, transport-related emissions of nitrogen dioxide are increasing, and “it looks probable that Ireland will exceed the EU annual legal limit value for nitrogen dioxide in the near future.”